Michael relaxes in his empty house with a drink. He sits down to watch a movie on his TV but falls asleep. Later on he is awoken by Jimmy who apologizes for drugging him. He would love to just hug things out with his father but that would be... lame. Michael is a drunk lame dad. Slightly changing the subject, Jimmy needs a car. He says he'll get a job and stop smoking weed. Michael tells him to go the job route since he doesn't have money and will probably be dead soon. As for Amanda, Jimmy winds up his father about her sexual escapades before telling the truth that she's mad at Michael but worried he's going to die. She also wants him to prove he's man enough to get her. Michael agrees. They'll also pick up Tracey who is a sort-of star according to Jimmy.

Get in the car and drive to Bean Machine a couple blocks away. Park the car and walk up to the next marker. It's apparent that Fabien isn't quite the boy toy Amanda wanted. After interrupting a self-proclaimed screenwriter, he makes remarks about Michael and Jimmy that are apparently offensive. The screenwriter continues to shush them during the conversation and Amanda tells Michael to just hit Fabien. Michael grabs the screenwriter's laptop and puts plenty of words back into Fabien's mouth. With a lot of help from Jimmy, Michael explains himself to Amanda. She agrees for them all to meet at Dr. Friedlander's office. Amanda escorts Fabien away. Michael and Jimmy will go get Tracey. 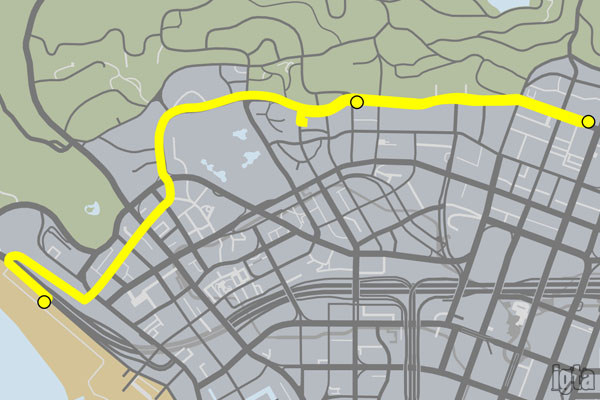 Get back in your car and drive to the tattoo parlor in Vinewood. Jimmy says Tracey is with Lazlow trying to get back on Fame or Shame. Park and walk up to the shop. Inside Lazlow basically tells Tracey to blow him to get on the show. Michael walks in and grabs Lazlow. Jimmy is instructed to keep the ink artist at bay. Michael pushes Lazlow into a chair and you are put in control to give him piercings on his brow, nose, and ear. Do all three and Michael rips of Lazlow's shirt before moving him over to the tattoo bed. Give him a tattoo on his chest or back. You'll need to move the analog stick as shown on the screen to complete it. After that Lazlow is shoved to the ground and you are told to snip his ponytail. Michael tells Lazlow to get Tracey whatever she wants - without the sexual favors. The family leaves.

Get back in the car and drive to Dr. Friedlander's office. Tracey doesn't think Dr. Friedlander is a good choice for them. Both kids don't have favorable opinions about Fabien and are glad their father is using his rage for better purposes. Michael is glad they are all getting together but he and Amanda will need to iron out their issues at the therapist. Pull into the driveway at the office. Amanda is waiting and tells them all to go inside.

The family enters the office as Dr. Friedlander greets them. Michael and Amanda sit on one end of a couch and the kids at the other. Michael meets Friedlander's greetings with sarcasm which Amanda uses to start the conversation. They go back and forth about their lives - some details of which draw comical reactions from their children. Michael and Amanda basically yell at each other for a few minutes until Dr. Friedlander thinks they have done enough. He lets them out but stops Michael to advise him of the increased costs for family therapy. No surprise there.

Outside Michael asks Amanda if she's going to come back home. She agrees to give it a shot. Get in the car and drive to Michael's house. Michael definitely thinks they need more time to work things out and get beyond screaming at each other. Amanda concludes that no one really knows this family. Not the therapist, Fabien, the tennis coach, or the long list of other men she's apparently had relations with. In the end Amanda just wants the family to stay alive. Michael promises. Lastly she mention's Michael's own sexual habits. Back home they all go inside. Amanda says if anything is out of place they are going to a hotel. After the mission is complete you are SWITCHed to Trevor who wakes up on the coast after a long night of drunken fights.