On iGTA5.com you'll find rumors and speculation about the game, fan artwork and fake screenshots along with official news and facts including the Release Date, Images, Characters and other official content. We also have a dedicated GTA 5 Forum specifically for GTA V discussion, so make sure you get signed up!

If you have any GTA V news, content, or fan art to share with us, please email submit[at]igta5.com!

With a heatwave scorching Southern San Andreas, gas prices soaring, and the economy on the brink of collapse, it may look rocky out there...

But this is Los Santos, where every dark fiscal cloud has a solid silver lining. On the black market, business is booming, and opportunities abound in The Criminal Enterprises, today’s new update to GTA Online across PlayStation 5, PlayStation 4, Xbox Series X|S, Xbox One, and PC.

Welcome back to Los Santos. Experience entertainment blockbusters Grand Theft Auto V and GTA Online on the latest generation of consoles — now available for PlayStation 5 and Xbox Series X|S through the PlayStation 5 console store and the Microsoft Store with a host of improvements and upgrades for new and returning players.

Note: It seems the "Expanded and Enhanced" wording of the upcoming versions has been dropped entirely.

Grand Theft Auto V and Grand Theft Auto Online arrive for PlayStation 5 and Xbox Series X|S on March 15 - delivering the action-packed, blockbuster Story Mode adventure and the dynamic, ever-evolving world of GTA Online to the latest generation consoles with a host of improvements for new and returning players.


These new versions of GTAV and GTA Online introduce high-end PC visuals to the console experience with new graphics modes featuring up to 4K resolution, a frame rate of up to 60 frames per second, improved texture quality, HDR options, and ray tracing - as well as utilizing the technical advancements of the latest console hardware for faster loading times, immersive 3D audio, support for platform-specific features, and more.

As the GTA Online community continues to grow stronger with each passing year, Rockstar Games would like to take this opportunity to thank everyone for playing with us across 2021, whether through the high-speed thrills of Los Santos Tuners, chasing down Dr. Dre’s lost tracks in The Contract, or just causing havoc in Freemode with friends. As we enter our third console generation and with much more to come in 2022 and beyond, here is a look at just some of what’s on the way.

The Contract – Short Cuts to Short Trips and More

The Contract brought GTAV’s story into present-day GTA Online as players helped Franklin Clinton set up his celebrity solutions agency and track down hip-hop mogul Dr. Dre’s lost, unreleased music, along with an array of new gameplay including Security Contracts, Payphone Hits, and the ability to step into the shoes of Franklin and Lamar for the Short Trips co-op story missions.

To ensure everyone can easily experience the fun of Short Trips, players will soon be able to access Short Trips directly from the Jobs menu without completing The Contract’s story missions. And look for official versions of Dr. Dre’s tracks from The Contract, hitting your favorite music streaming service today.

A New Generation for GTAV and GTA Online

With the GTAV community stronger than ever, Grand Theft Auto V and Grand Theft Auto Online will come to the PlayStation 5 and Xbox Series X|S platforms this coming March 15, bringing the blockbuster open-world experience to players on the latest hardware. We sincerely appreciate the entire community’s support over the years as the game now heads into an unprecedented third console generation.

Grand Theft Auto V and GTA Online for PlayStation 5 and Xbox Series X|S features new graphics modes with up to 4K resolution, up to 60 frames per second, texture and draw distance upgrades, HDR options and ray-tracing, as well as offering the technical advancements of the latest console generation with faster loading times, immersive 3D audio, platform-specific features like advanced haptic feedback, and much more.

PS4 and Xbox One players eager to continue their journey on the newest generation of hardware will be able to transfer both their GTAV Story Mode progress and their current GTA Online characters and progression to PS5 and Xbox Series X|S with a one-time migration at launch.

Plus, a new standalone version of GTA Online for PlayStation 5 and Xbox Series X|S will debut at launch — available for free for the first three months to PlayStation 5 players — making it easier than ever before for new players to experience everything GTA Online has to offer.

Improvements to GTA Online
GTA Online for PS5 and Xbox Series also includes a range of improvements including the ability to skip the GTAV Story Mode prologue before entering Online, and an all-new GTA Online Tutorial. New GTA Online players will now enter the Career Builder, with instant access to their choice of one of four illicit businesses — Biker, Executive, Nightclub Owner, or Gunrunner — and a sizable GTA$ windfall to help select a property, high-end vehicle, and the firepower required to kickstart their enterprise. Returning players will also have the option to restart their character and take advantage of the Career Builder at any time.

The PS5 and Xbox Series X|S versions of GTA Online also include the new Hao’s Special Works auto shop, located within the LS Car Meet, which will allow players to upgrade select vehicles (5 new vehicles and 5 existing vehicles at launch) for elite driving performance that takes full advantage of the upgraded power of new console hardware.

"With the unprecedented longevity of GTAV, we know many of you have been asking us about a new entry in the Grand Theft Auto series. With every new project we embark on, our goal is always to significantly move beyond what we have previously delivered — and we are pleased to confirm that active development for the next entry in the Grand Theft Auto series is well underway. We look forward to sharing more as soon as we are ready, so please stay tuned to the Rockstar Newswire for official details.

On behalf of our entire team, we thank you all for your support and cannot wait to step into the future with you!"

Join forces with one of Los Santos’ most famous hustlers and his friends in GTA Online: The Contract, an all-new adventure for solo players and groups, featuring the return of Grand Theft Auto V protagonist Franklin Clinton, manager of F. Clinton & Partner, a "celebrity solutions Agency" ready to fix the special kinds of problems plaguing the high rollers of Los Santos.


With your partnership in the Agency, you’ll work alongside new and familiar faces including Franklin’s longtime friend Lamar Davis, his loyal sidekick Chop, and the Agency’s elite in-house hacker Imani. And in the Agency’s first A-List client contract, you’ll help Dr. Dre resolve a high-stakes theft.

In the years since he and his accomplices knocked over the Union Depository, renowned Los Santos hustler Franklin Clinton has been making moves of his own.

During a PlayStation Showcase event today, it was announced that the PS5 release of Grand Theft Auto V has been delayed to March 2022. The Xbox Series X version will be the same.


Grand Theft Auto V and Grand Theft Auto Online will now arrive on PlayStation 5 and Xbox Series X|S March 2022, featuring a range of technical and graphical improvements across the entire experience including performance enhancements for select vehicles in GTA Online, and so much more.

While we are extremely excited to be bringing GTAV to the latest generation of consoles, the game requires a few additional months for polishing and fine-tuning. We look forward to sharing more details about these expanded and enhanced versions soon, including the new standalone version of GTA Online also coming to PlayStation 5 and Xbox Series X|S in March.

Meanwhile, check out the latest trailer above, which was also featured during today’s PlayStation Showcase, and stay tuned to the Rockstar Newswire for details.

In addition, the new standalone version of GTA Online will be available to claim for FREE on PlayStation 5 for the first three months after launch in March 2022 (Does not require GTAV to play).

Car culture is taking back the streets in GTA Online: Los Santos Tuners.


Los Santos Tuners delivers an action-packed new update for all fans of GTA Online, featuring the LS Car Meet, a brand new club and social space for players to get together and show off their customized personal vehicles, test new cars with friends on a private track, watch others mod their cars in real time, and more player-requested features, plus 10 new highly customizable cars in a range of tuner-inspired styles, a new Auto Shop property, six epic new robbery-style Contracts, new races, a host of new quality of life updates, and much more.

GTAO Ending for PS3 and Xbox 360 in December

Rockstar Games has officially started a countdown for the end of GTA Online on old-gen consoles. The services will cease for PlayStation 3 and Xbox 360 on December 16th, 2021.

We’d like to thank the GTA Online community for their continued support, and look forward to seeing players continue their journey in Los Santos with us on new platforms.

Social Club stat tracking will also end, as well as for Max Payne 3 and LA Noire on PS3 and XB360. Single player content will not be affected for any of the preceding titles. 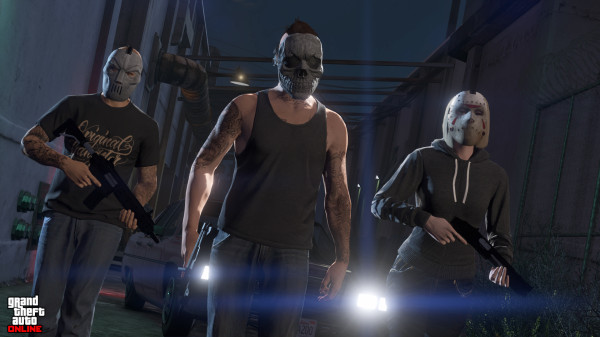