Starting with Michael, he rummages the fridge at his house only to find a block of weed stashed in it. Amanda blames herself for the state of their kids since Michael was always drunk or doing other things. Michael reminds her how she was living in a Midwest trailer park and now has a mansion. Amanda was faithful until she found Michael "in" a stripper at one point and would divorce Michael if she could. At the mention of yoga, instructor Fabien enters the kitchen. Michael isn't too happy to see him and Fabien says he needs to work on his anger.

Jimmy walks in and goes to the fridge. Michael knows what he's looking for and won't give Jimmy his block of weed back. The two begin a shouting match with Amanda joining in until Trevor appears. Everyone is speechless. Michael eventually greets his old friend who is wondering how Michael ended up in such a nice place. Michael says it was an awkward situation - a fake your own death and run off with the dough and live in a big mansion awkward situation as Trevor puts it. Trevor is visibly upset with that explanation.

Switching gears, Trevor greets Amanda and Jimmy. A terrified Fabien introduces himself. Tracey is out auditioning for the TV talent show Fame or Shame. Michael believes she is going to humiliate herself on national TV. Trevor convinces Michael to go and get her together. They head out.

As Michael, get in the car and drive to the Maze Bank Arena. Michael comments that he'll take care of this and have a beer with Trevor later. Trevor is not letting him go alone since he probably won't do anything about it. He thinks Michael will abandon his daughter just like he and Brad 9 years ago. Trevor says Brad still writes to him from prison but Michael doesn't seem to take much interest in Brad's affairs. 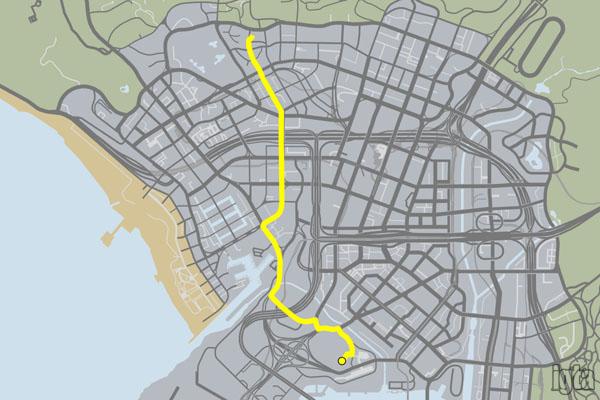 Trevor tells Michael how he is living in Sandy Shores a few hours away but has a place more local for the time being. No need for Michael to barricade his house. Michael says they have things to work out and Trevor couldn't agree more. Pull into the marker outside the arena. You'll probably notice the big rigs and think "Yeah, I'm stealing one of that". Walk to the new marker inside the doors of the arena.

The two walk inside and start their search for Tracey among the many auditioners in the lobby. A staff person walks up and Trevor questions him with a little force to find Tracey or Lazlow. After being pointed in the right direction they end up on the audition set right as Tracey is brought in front of the camera by Lazlow. She's obviously a little nervous. Lazlow points out the two dads off stage and Tracey is happier to see Trevor than her own father. She gets back in front of the camera and the music starts.

Tracey's dance matches the skimpy outfit she's wearing. Michael finds it very difficult to watch his daughter work her body for the judges but Lazlow doesn't seem to mind and even joins in. Big mistake. With Trevor's urging, Michael shoves Lazlow away and Trevor takes out a security guard with a folding chair. They run after Lazlow as Tracey cries on the stage floor.

Chase after Lazlow. Follow Michael up some stairs and outside. Lazlow takes off in his car and the pair decides to grab the tractor trailer in the lot since Michael's car was towed. Commandeer the truck and go after Lazlow. Trevor can't believe Michael was going to stand by and watch his daughter get exploited but Michael says that's nothing abnormal in this town. You are told how to detach the trailer if needed. Michael and Trevor will continue to make remarks to each other during the chase. 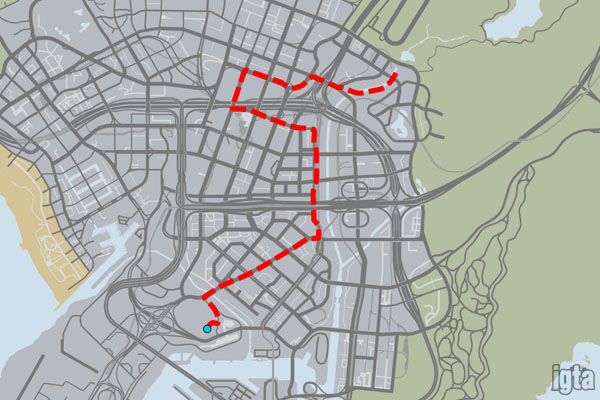 Eventually Lazlow heads into the LS River channel and his car quits. Michael and Trevor walk up. Trevor says he made a vow to protect Tracey when she was two years old and will rip the skin off anyone that wrongs her. Lazlow pleads with them saying he has tons of sexual harassment lawsuits pending and is a habitual masturbator. Michael seems okay with the current level of intimidation but Trevor wants to go further.

Trevor orders Lazlow to take his pants off. He takes out his phone and tells him to do a sexy dance. Lazlow does so as the phone records it. After he falls Michael helps him up and tells Lazlow to run off. Trevor doesn't know how Michael faired for 9 years without him. He gets in the truck and drives away. Michael climbs up out of the river and calls Dave. They need to talk and will meet at the observatory.