When Grand Theft Auto V's multiplayer launches two weeks after the release of the main story campaign (October 1st), players will be introduced to one of the most unique multiplayer experiences on the market. With so many different activities and the level of customization available to the play it will truly be second to none!


Welcome Back to Los Santos, Population: The World

Set before the main game's storyline the multiplayer's story begins when you step off the plane into the warm Los Santos sunshine. What you do after that point is up to you! Do you immediately try to jump into an activity with one of the 15 other people wandering the countryside or do you try and make a go of it yourself? 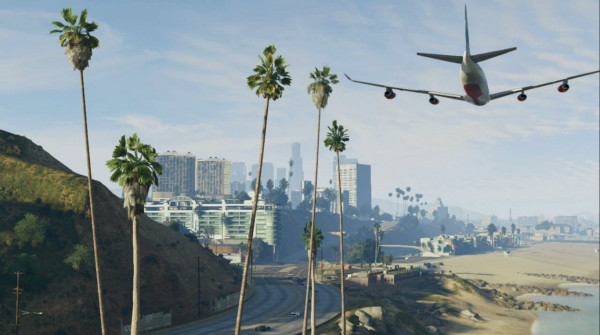 Rockstar has created a matchmaking system to automatically match players up with people of a similar skill level, but of course it gives priority to any friends of yours that might already be online. If you want a friend to join your current game they're only a message away! Of course once you get your group together its time to get down to business.

Heists and other Activities

There is plenty to keep you occupied once you do get out and into the great wide world of GTA V multiplayer, up to and including robberies, races, deathmatches and just general messing around.

Missions can be launched on the fly, and can be structured or non-structured depending on what you're in the mood for. For example when it comes to robberies you can launch a multi-part heist of a bank or armed compound where each player has their own role to play to make off with the large loot. Or if you wish you can simply hold up a liquor store. The choice is yours.

Use your voice (via microphone) to encourage your victims if they are moving slow or don't find you threatening. 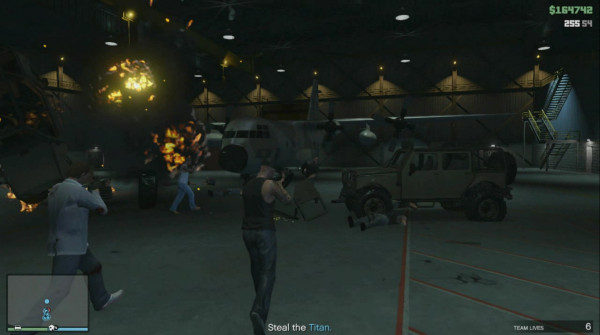 But of course robberies aren't the be-all end-all of GTA V's multiplayer! You can instead go racing like it's 'Midnight Club: Los Angeles' at the drop of a hat. There are plenty of preplanned racing courses scattered all over the map but if you're looking for something a little more personal you can always make your own course and see who comes out on top! 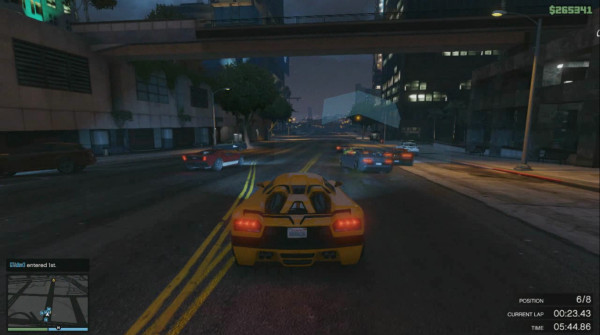 It's not like all the racing takes place only on the ground, you can also race through the air in airplanes and helicopters! While it's not currently known if you can create custom races for aircraft I personally wouldn't be surprised to see it included. 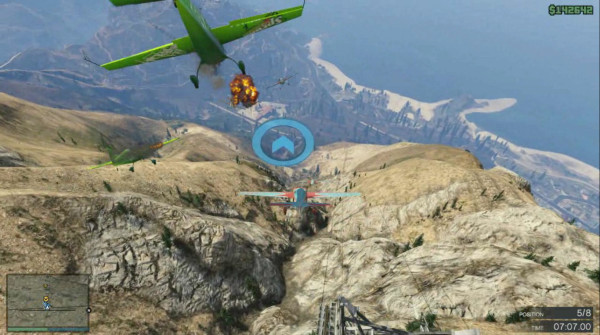 Like racing, deathmatches can be found all over the map...just waiting on player to come up and test their skills against each another. Of course if you want you can also make your own custom deathmatch and maybe try to stack the odds a little more in your favor. There is no right or wrong way to go about it after all! 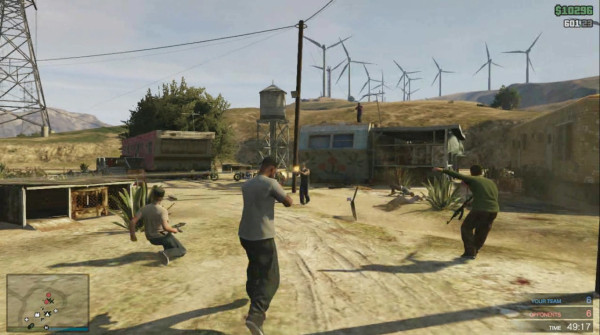 Of course if you're not in the mood for any of these at the moment you can just go off and do something else... and with this game that can be almost anything you care to do! You can challenge someone to an arm wrestling match, maybe go BASE jumping off of the Vinewood sign, perhaps you'll simply play a nice round of golf or tennis. For a more relaxing activity go see a movie or make it rain at a strip club.

If you don't feel like going out, kick back in your apartment (or a friend's) and watch TV while hitting a bong. When another friend attracts some police attention, switch over to the news and watch them from the helicopter following the rampage. Feel like starting your own trouble? Plan out a heist of your own. It's all, as we said, up to you.

When you do complete one of the many activities available to you (structured or unstructured) you'll gain not only money, but Reputation Points as well.

GTA V's multiplayer will be much more like the main game this time around as you'll not only be able to earn money, but you'll have just as much stuff to spend it on as well! Whenever you successfully complete an activity you'll earn money.

But of course in group activities the leader of the current group will be the one to divide it up as he or she sees fit. But watch out! They could instead decide to take it all for themselves and leave you with nothing. In that event you're only choice is to chase them down and take back what it rightfully yours. 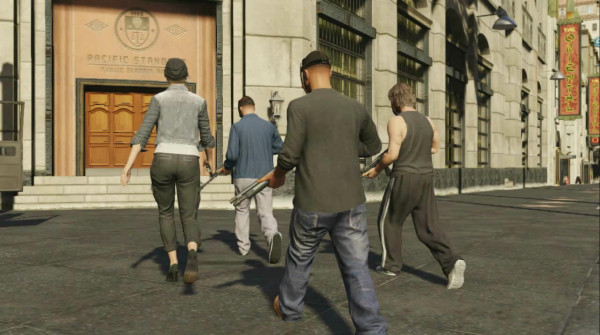 Whenever you do get your cash make sure to deposit it in the bank as soon as possible! If you're killed by a rival player while still carrying cash you end up dropping some of it on the ground for them to swoop in and steal!

Reputation Points (or RP for short) are a different kind of currency altogether. Every time you complete an activity you earn them and the more you have the better! By collecting RP you unlock new missions and new NPCs to interact with. 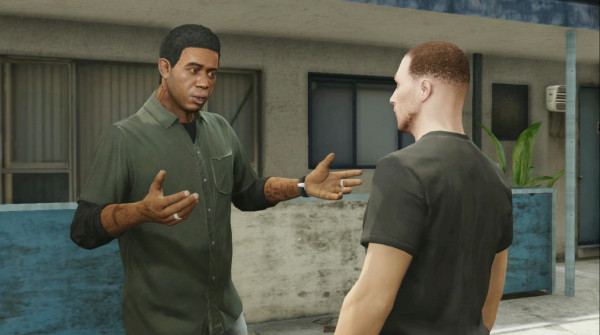 Once you reach a certain number of points you'll be able to call in favors from various NPCs you've met that range from hiding your radar blip from other players to calling in an airstrike on a target. These favors can be called at any time no matter what you're doing.

Now that you've earned some money, what can you do with it? Customize anything and everything, that's what! From your own character to your surroundings it's all open to your personal touch.

This time around it seems you can create a truly unique character to play as. Yo can control almost everything about them. Start by choosing between a male character or a female one, then decide how old you want to be. Pick the race of your choice and then go wild picking out different clothes and hairstyles to really complete the look. 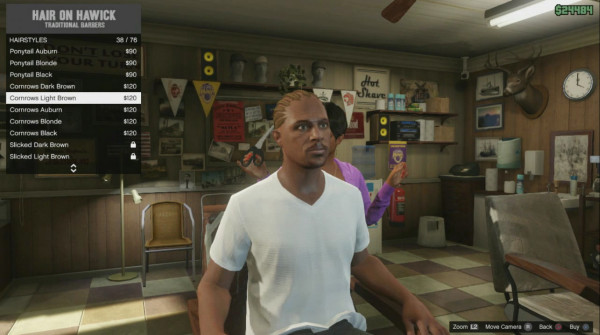 Now that you're looking your best it's time to make sure your car is the best one in all of San Andreas. Do you can to focus mainly on looks and get the flashest paint-job on the west coast or do you want to make it the fastest car around in order to win every race? Why not do both? 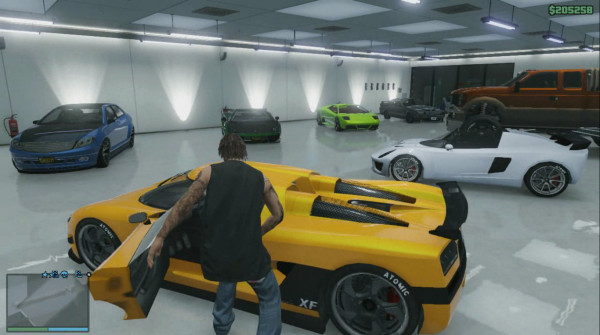 And then you're done you can store it in your garage with all of your other custom vehicles. But don't worry about losing your favorite car to a rival's rocket launcher, you can take out insurance on your cars so if they're ever destroyed you'll be able to have it fixed back good as new!

As mentioned above you can even make your own missions including full races. Place weapons, pick enemies, then challenge your friends to complete it in one shot. The Social Club will store all of your custom missions where you can share them with others.

What do you think? Hit up the comments below or the Grand Theft Auto Online forum here.
All content created by and property of iGTA5.com and must not be reproduced without express written permission. © 2011-2023 iGTA5.com