Michael finds Devin Weston and Molly in Solomon's office at the movie studio. Solomon Richards is out getting the film negatives. Weston thanks Michael for keeping things going with the studio and the new movie but they'll be pulling the plug and the investors will get insurance money. Weston will then convince Solomon's son to let him turn the studio into condos - possibly tax free in this economy. Richards enters and immediately goes on the offensive. He eventually hands over the negative reel to Molly who has a plane to catch. Weston informs the film makers that she is taking the only copy offshore. Richards asks Michael to do something. Michael doesn't take kindly to getting screwed by a "yogi". He runs out saying he is a producer.

Back outside grab one of the sports cars and go to the airport to find Molly. Weston will call and tells Michael to think. Molly has a police escort to Weston's personal hangar and airport security work for him too. Molly won't hand it over to him anyway. Michael refuses to stop. The path you are shown takes you around the Maze Bank Arena and down to a back road into the airport. When you get near the marker you are told to chase Molly. When she enters the airport area police get behind her and a news chopper follows overhead. The police try to calm her down but she continues to drive erratically through the airport. When you get close to the escort you are given a 2 star wanted level which turns into 3 stars after going through the airport security gate. You can also now view the news chopper camera which will showcase the excitement on Weazel News. 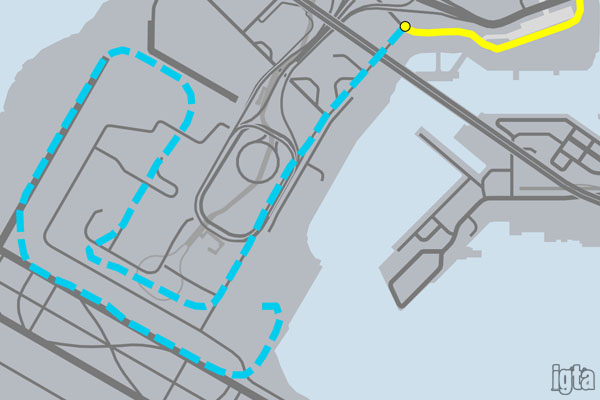 Molly speeds by Weston's hangar to the left and continues around to the right onto the busy tarmac. She comes head to head with a fuel truck which cuts over and explodes taking out a cop car with it. Get around to the left and continue to chase Molly. She drives towards the runway but then makes a right towards a large airplane backing out of a gate. The camera zooms in as another cop car gets blown away by the jet engines. Molly continues under the terminal as workers dodge her. She drives around the active fire department training area and onto the west runway. Another large plane lands in front of everyone and blows back two more cop cars. Molly makes her way onto a southern runway and comes head on with yet another large airplane. She dodges it but cop car gets taken out by an engine. Molly heads back towards Weston's hangar. She drives around the back and finally stops at a doorway.

A cutscene shows Molly get out yelling at the remaining officers that Michael is going to kill her. She runs inside with the film so continue to chase after her. Once inside the hangar she runs towards a large airplane as a worker tells her to stop. Molly runs in front of a running jet engine and gets sucked into it. Blood sprays out as the engine gets destroyed. Run over and pick up the film reel. The cops' attention will now be on you so get out of there and lose the attention. Either grab the Shamal in front of you or go back to your car. A security guard will come from the small plane to kill him and head out. When you lose the cops Michael calls Richards to tell him about Molly's demise but the film is safe. Richards informs Michael that it's all digital these days and there are backups everywhere. The reel is a dummy and the movie is actually having final edits completed. Good to know. Richards goes on to say that they are going to have a premiere for the movie and Michael's family is invited.