Michael arrives home as Amanda is leaving. For once they are nice to each other and dinner is proposed. Unfortunately Amanda is going to yoga - which waits for no one. Michael goes to the living room and gets drinks ready as Franklin enters. Michael tells Franklin that Lester knows a guy who will give 50 cents on the dollar for the jewelry and that he might have some spending money left over after paying back Madrazo. Good times ahead...

A man in a decent suit enters the room rambling about a file and asks what's wrong with Michael. Michael greets Dave - his FIB "buddy" - who he hasn't seen in a little while. Dave questions what will happen when Trevor finds out Michael is alive and what he did. Michael isn't worried about him and won't admit to doing anything. Dave grabs the TV remote and turns on the news. The police officer Michael told to "forget this" at the store is being interviewed. Michael turns off the TV and continues to plead innocent to Dave.

Cut to a middle-aged man having his way with a biker chick in a rundown kitchen. The police officer on TV mentions Michael's quote which gets the man's attention. He pulls out and pulls up with a blank stare and walks out. The girl asks him - Trevor - if he wants to smoke up. Outside two other men try to stop a biker - Johnny Klebitz (from GTA IV) - from entering Trevor's trailer. He's looking for his girlfriend and is pretty sure she is with Trevor. Trevor walks by without acknowledging him.

Johnny chases after Trevor and eventually gets him to stop across the street. Trevor says he needs to fuck somebody and if Johnny wants it he has no problem giving it to him instead. The other three run over as the older guy - Ron - tries to explain his side. Trevor doesn't want to hear his side and consoles the meth-head cowboy who still loves his girl. Johnny doesn't want to start anything and says it's just the meth.

Trevor hugs him before throwing him down and beating the life out of Johnny. He says he just saw a ghost and doesn't want to hear Johnny's crap. He storms off as the girl mourns over Johnny. Ron and the younger guy with face paint - Wade - follow Trevor back towards his trailer.

Trevor says they have to go after the rest of the bikers. Hop into Trevor's truck and head to Grapeseed. He tells Wade the ghost he saw was named Michael Townley who is apparently living in Los Santos. Wade has a cousin in Los Santos and is instructed to find Michael. Back to the situation at hand, Wade says if they can keep Johnny's death and his girlfriend - Ashley - quiet then the rest of the bikers won't know a thing. 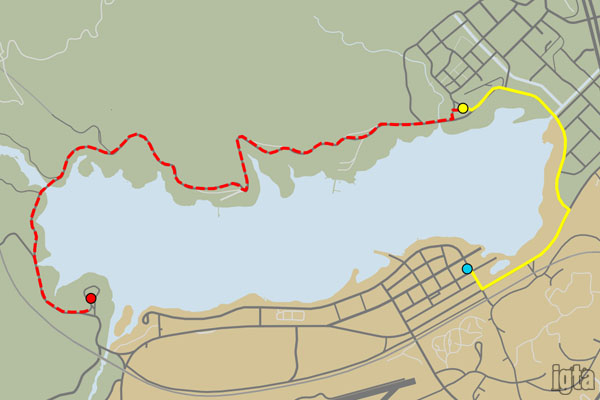 Pull into the marker at the farm as the camera focuses in on the bikers hanging out to the left (the two with the motorcycles are Terry and Clay from GTA IV). In a cutscene they ask Trevor if he has seen Ashley since Johnny is looking for her. Trevor isn't one to beat around the bush and admits exactly where she was with a little body language. The bikers say Johnny won't like Trevor messing around with her again but once again Trevor gives an animated explanation of what Johnny would say now. The bikers choose not to believe Johnny is dead and take off on two bikes and in a van.

Chase after the van to see where it goes. Trevor says they can get rid of the motorcycles so ram them or shoot Terry and Clay off. There are various turns and divides in the roads to slow them down or isolate a motorcycle. Ron will comment that there are bikers all over Blaine County including an airstrip so it will be difficult to take them all down. Trevor is confident their organization will end. Eventually the van will enter the Lost MC's trailer park.

Take out the bikers. There is no set order and you can choose which way to enter the trailer park. Enemies will come from various places including the trailers themselves. A few will drive motorcycles or a truck around the road so be ready. There are various propane tanks scattered around as well as other vehicles to blow up. Trevor's "frenzy mode" special ability can be very useful. You'll do double the damage and take only half. Also note that a shotgun isn't your only weapon available plus the weapons you can pick up from the bikers.

When there are only about 4 bikers left they will give up and run. Get back to your truck and Trevor will tell Wade to get to work finding a ghost plus get some sticky bombs. You are told to go to a riverside trailer which is home to Ortega - a high ranking member of the Aztecas. Ron says he has a Chinese contact that will buy all of Trevor's meth but Trevor says their business is about guns too. The Aztecas control guns so they are taking them out as well.

After reaching the trailer Trevor automatically repositions the truck facing the end of it. Ortega can be seen in the window gesturing and yelling at Trevor. You are told to ram the trailer and push it into the river. Do it. When the trailer splashes down Ortega leaps out. Trevor tells Ortega that he and the Lost MC are out of business. The drugs and guns in this area are under control of Trevor Philips Enterprises.

Ortega doesn't think Trevor is serious and you are told to threaten him. Point your gun at Ortega until he concedes (kind of) and walk away or just shoot him. Decide his fate and get back in the truck. Drive to Ron's place. Ron can't believe they are actually taking over Blaine County. Trevor says he means what he says even if things don't happen right away. This includes his death unlike Michael Townley - Trevor's old running mate - who is alive all of a sudden.

Trevor was "T" in the bank robbery 10 years ago. "B" is named Brad and Trevor says he's in prison and won't believe that Michael is alive. Trevor isn't really sure what happened to Michael since he thought he was dead. Ron is kicked out at his house. Trevor's home is introduced to show the bed, closet, etc. After the mission is complete Ron will call and say the Chinese contact - Mr. Cheng - will meet Trevor at the inn. Trevor becomes upset that Ron said that much information over the phone. Offroad races are now available. New-Gen returning players: Stock Car Races also become available.