We join three bank robbers in Ludendorff, North Yankton 9 years ago. As the robbery unfolds messages tell you about the radar, how to walk, and other aspects of gameplay. Now playing as one of the robbers, you are told to walk through the door to the guard being held hostage with a few others. Your character pushes him over towards the other hostages before a second robber brings in a woman and the third robber goes to set plastic explosives. The second robber tells you - now named "M" - to get the hostages in the closet.

Aim at the hostages to make them move. The explosives are set and you are told to blow it. Pull up your phone and follow the instructions on screen. In a cutscene the vault door is blown open.

Enter the hallway and make your way to the marker. The robber who set the explosives - now named "T" - is quite excited. Inside the vault you are told to collect the cash. Go the new marker near the back and a cutscene will do the rest. Once the cash is collected head out. "T" tells the third robber - now named "B" - they are leaving.

While "M" exits the vault, a security guard grabs him and puts a gun to his head. You are told to SWITCH to "T" with instructions given. Do so and take out the guard without harming "M". Again, instructions how to use the gun are displayed. With the guard down the trio decides it's time to leave. Around the corner you are told to take cover. "B" places more explosives to blow open the next set of doors. After the dust clears head out while sirens blare.

In the next room stand near the garage door opener to activate it. On the other side a police cruiser pulls up and some very unhappy officers exit. Take cover and shoot as reinforcements arrive in two vehicles with two more running up. They'll hide behind their vehicles so you'll probably need to move up (or wait for the right second they pop their heads up). Move out of the gated area and continue to take out reinforcements with four vehicles pulling down the road. You can do a Quick SWITCH if needed over to "M". 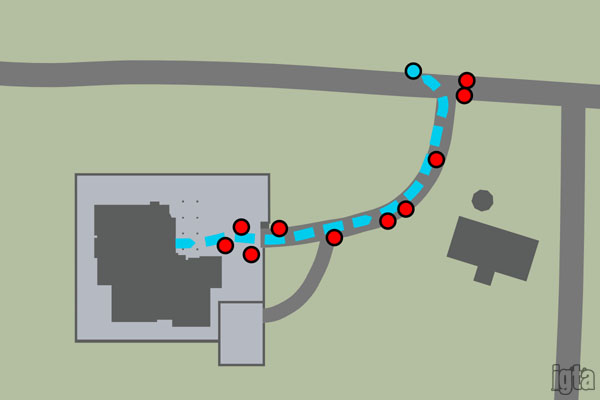 Continue to the main roadway where a getaway vehicle is located. Two more police vehicles arrive from the right so take care of them. Get into the SUV where a fourth robber is waiting at the wheel. The crew takes off but it's not long before more cops are on their tail. "T" starts firing on the cruiser running alongside. The driver of the getaway SUV is hit in the head during the exchange. "M" shoves him out and takes the wheel.

After forcing the police cruiser into a tree you are put in control of "M" driving the SUV. Drive to the helicopter pick up point by following the GPS on your radar. A few more cops pass you but "T" mentions they don't know what vehicle you are in yet. After crossing a set of railroads tracks a roadblock is spotted. Continue to follow the GPS with a hard right and hit the gas. Going across the open field will not hurt and trigger the next cutscene a little early.

The SUV flies across the next set of railroad tracks but gets clipped by the train. The SUV spins and hits a pole. With the getaway vehicle disabled the crew is forced to continue to the helicopter on foot. While approaching a few farm buildings a sniper shoots "B". "T" takes cover and yells that someone went to the Feds. "M" stands over "B" - revealed to be named Brad - saying that he'll be fine but ends up getting shot as well. 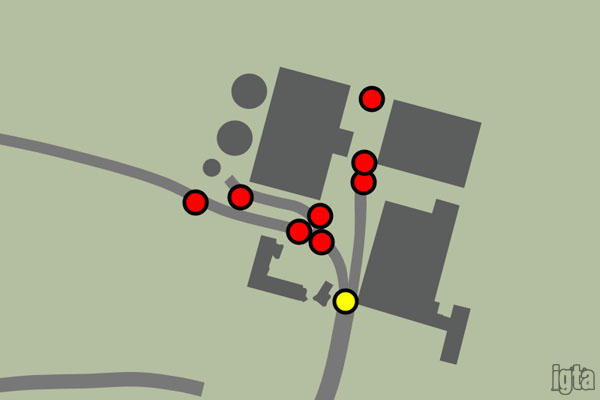 "M" yells to "T" to leave but he refuses - and reveals "M" is named Mike. As cops enter the area you are put in control of "T". Fend off the cops to save the other two. When most of the first wave is down another will roll in. "T" finally decides to make a run for it and the cops give chase. He tries to find out where their helicopter is but a scared woman is no help. He holds her hostage but then throws her towards police and runs. They chase him through a field.

Later in a cemetery a small funeral is being held. The gravestone reads "Michael Townley". The sniper at the farm is quietly pacing nearby wearing a dress shirt and tie under the same jacket. Just outside the cemetery fence, hiding amongst the trees, is Mike - watching over his own funeral.