Walk into Ponsonbys to buy a suit. Jimmy messages Michael that he'll be there soon. The suit rack is to the right. Buy a tux and walk outside to meet Jimmy. Jimmy says a producer doesn't drive himself to a premiere and walks towards a limousine. Get in. During the drive Jimmy enjoys the high life a little bit by standing through the sunroof and ranting about the future of his new life. Eventually Devin Weston calls. Michael tries to explain that Molly's death was an accident. Weston doesn't take the apology too well.

When the limo pulls up to the premiere, get out and walk onto the red carpet. Jimmy says Amanda and Tracey are at home. They'll be fashionably late. No big surprise to Michael. Lazlow is shown near the theater doors doing interviews for Weazel News. A very happy Solomon Richards greets Michael outside. He's quite excited to prove everyone wrong and make a big movie. When Richards heads inside Lazlow gets a few quick words - but not very nice ones. Lazlow moves on to another celeb but is cut off since the movie is starting soon. Michael greets Lazlow who decides to quickly go inside. Michael looks around the red carpet for Amanda. Weston runs up and congratulates Michael. He gets a picture taken with the De Santas by the paparazzi to prove he is here - unlike Amanda who is stuck at home. Weston walks inside laughing. Right away Michael knows Weston did something. He tells Jimmy to follow him. The girls are in danger so they need to get home right away.

Man of the house

Grab a vehicle and drive to Michael's house to save his family. Weston messages Michael that he has 2 minutes to sacrifice himself for his family. A countdown timer starts. Michael explains the situation to Jimmy about Weston, the studio, and Molly. He isn't a mafia-type person himself but he's rich and has plenty of connections. When you pull into the driveway you may notice the vehicles by the garage and some Merryweather men running inside the house. Jimmy is told to conceal himself. Walk inside to find Amanda on the stairs with a gun to her head. Shoot the guard to save her. She runs upstairs saying that another has Tracey. Run up after her. Inside Tracey's room the guard moves into view holding Tracey hostage. Carefully shoot him without getting Tracey. More are heard downstairs. Michael tells the girls to stay put. He runs into the hall and takes cover.

Shoot the guard coming up the stairs. You are told to clear the house of Merryweather. Grab the health pack in the upstairs bathroom if needed (right of Tracey's room). Make your way down the stairs watching out for more guards and a grenade coming through the front door. Two guards follow it and a third is off to the left in the living room. Kill them and move towards the kitchen. Two more guards take cover in the kitchen and a third is off to the right in the dining room. One more is outside the east dining room doors. Kill them and grab the health pack in the kitchen if needed. Another guard appears outside the south dining room doors so kill him too. Head out into the backyard where more guards are waiting. One is on the other side of a small wall and two are in the car port. Kill them and move towards the front. A vehicle with four more guards pulls onto the property towards you plus another vehicle follows with two guards but goes to the garage. Either blow them up or take out the guards individually. 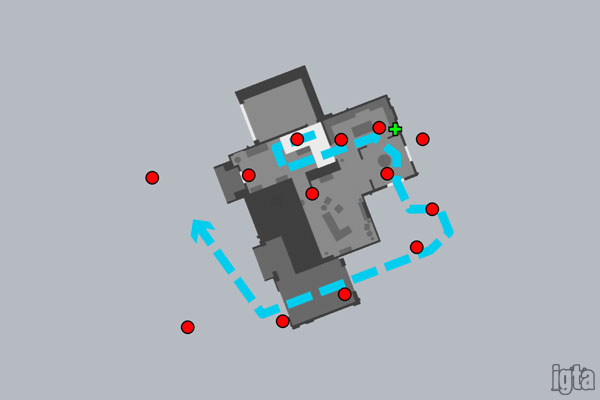 When they are all dead go back upstairs to Michael's family. When Michael approaches the bedroom a final Merryweather guard knocks him to the floor. Amanda and Tracey open the door. Michael tells him it will be okay. The guard begs to differ. Suddenly the lights turn off and the guard can't see anything. The camera switches to a person using night vision goggles and wielding a bong. They walk up to the guard and smash him over the head with it. They then stand over him and the camera moves up and down repeatedly. The lights come back on showing Jimmy - in full military gear - tea bagging Michael. Michael gets him away. Jimmy thought he was over the Merryweather guy. Michael corrals his family back into the bedroom. He needs to make a phone call.

Later Michael is shown at the Del Perro Pier on the phone with Lester. He's quite upset that Merryweather was at his house. He moved his family out for a few days. Lester says Merryweather and Weston aren't short on reasons to kill him. Michael still wants to move on the Union Depository as soon as possible. Lester says they'll meet at the strip joint. He'll notify Franklin and Trevor.