Franklin walks up to the house as his Aunt exits with two other ladies power walking and chanting pro-feminist things. Out on the sidewalk Trevor confronts them and tells them to shut up. They comply and quietly walk away. Trevor attempts to leap over the fence and face plants. Franklin laughs but Trevor gets angry. Franklin gets him to calm down a little and apologizes. Trevor accepts and scares Franklin during a bro-hug. Not wanting to be a funny man, Trevor reminds himself that he's an asshole while seemingly trying to make his head explode. Trevor is on edge right now but Franklin needs to know where Michael is. Franklin says someone got him in North Yankton and Trevor admits it's some Chinese acquaintances he knows. Franklin wants to find him but Trevor would rather he be dead. Trevor walks off.

Franklin calls Lester and gives him the update. Lester sends over the Trackify App which can be used to find Michael's cell phone which came back online. A cutscene shows Michael upside down in a slaughterhouse trying to convince Wei Cheng they are not lovers. It cost Cheng a lot of money and good men to get Michael so he won't be set free. He tells a worker to kill him since Trevor isn't coming. A conveyor is started and Michael heads towards a machine. Back with Franklin in his car, launch the Trackify App on your phone and follow the red blip. You'll end up in Cypress Flats on Orchardsville Road.

Two enemies are out front. Kill them and get inside to rescue Michael. More enemies will come out of the door with even more inside. Kill them and move up. Another will come around the corner plus the next corner and even more enemies are at the end of the next corridor. Grab the health pack on the left before turning the second corner if needed. Note the far enemy on the right is standing over a vat of acid. Shoot him a few times and he'll fall in. Kill the rest and move up. Enemies come around the corner again so be ready. Kill them and more are waiting in the next corridor. Michael yells that the machine got stuck. The enemy high on the right is standing over a grinding machine that he can fall into after a few hits. Around the corner is Michael with an enemy standing behind him. Shoot the guard and he'll fall onto a conveyor belt before getting mangled by saw blades. 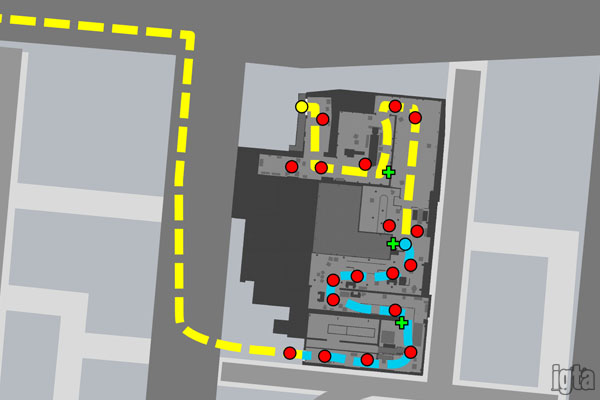 Michael is okay but more enemies are coming. Toss Michael a pistol as instructed and you'll be SWITCHed to him aiming down the next corridor. Shoot the two enemies approaching. Kill them and more will run up from the far side. Two more enemies will come into your area from the left so kill them as Franklin helps out with the others. When they are all dead you'll be SWITCHed back to Franklin who will move up to clear the areas ahead. Make your way between the hanging cow carcasses and kill the enemies that come around the next corner.

When you reach the corner a cutscene shows Franklin get tackled by an enemy with a knife. Franklin can barely hold him off so you are SWITCHed back to Michael and need to take him out from a distance with the given pistol. Use Michael's special ability if needed to land a shot and save Franklin. Michael then shoots himself loose and recovers from the fall. You are told to escape from the slaughterhouse. Grab the health pack on the left above a sink if needed. You can SWITCH between either character.

Go around the corner where a few more enemies are scattered around the room. The one in the middle will end up in a machine if shot. Kill them and move up. More enemies will be in the next storage area to the right. There is a health pack to the left opposite the next area. Move up and two enemies will be in the corridor to the right. One will hide behind a moving cow carcass. Kill them and get to the exit. Get in a car and two more enemies will come running after you. Either take care of them now or drive off and let the other protagonist shoot them during a chase. Drive to Michael's house.

With bullets flying other vehicles on the road will drive all over the place so be careful. When they are dead Michael thanks Franklin and wonders how he was found. Franklin says Lester helped him track Michael's phone and Trevor had admitted the Chinese got him. Michael gives a quick recap of the recent North Yankton trip before Franklin brings up Devin Weston and the lack of payment. Michael thinks it's a good idea for Weston to invest the money. He also has the movie studio deal working so he'll complete that to get leverage for Franklin's situation.

Back at the house Franklin tries to get a little more info about what happened in North Yankton - not recently but 9 years ago. Michael explains he had a young family. He was rolling with crazy guys that had nothing to lose. Michael saw an out so he took it. He knows it sounds cold-hearted but one day Franklin will understand. Franklin tells Michael to be careful of Trevor and Michael does the same. Franklin walks off and Michael goes into his house. Later Michael is shown cleaned up in his bathroom. Lester will message Michael that the FIB bosses want to talk and will meet at Lester's garment factory.