If you start this mission as Trevor, enter the marker and Lamar will call you. He says he has the last car for Devin Weston and is meeting Franklin so Trevor will grab a truck to haul the cars out to Paleto Bay. You will then be SWITCHed to Franklin. If you start the mission with Franklin, Lamar will call him and say he has the last car so they should meet up. In either case, as Franklin go meet Lamar and collect the car. Get in and take the car to the garage. Lamar says getting this car was easy and smooth. No trouble at all. Franklin disbelieves Lamar really got in and out without anyone noticing.

When you arrive at garage line up the car with the trailer and drive it up. Trevor is ready to go and the three get in the truck. SWITCHed to Trevor, drive the truck out to the drop-off point near Paleto Bay. The designated route will take you across the city and over to the Western Highway. Lamar gets comfortable next to the rumored cannibal and Franklin decides to take a nap for the 4 hour journey ahead. Lamar asks Trevor about Michael and Trevor eventually admits that liar Michael might be dead. Unconfirmed. Franklin is probably unaware of Michael's status. Trevor talks a little about Brad too and how Michael got him killed. The discussion moves on to the life of truckers before Lamar presses Trevor to talk about Michael and how they met.

Trevor says he was running a small air freight operation in North Yankton when he was about 20 years old. He got tasked with moving some hot cargo across the border for a friend of a friend. The money was good so he agreed. A single person was supposed to meet him but the fat cargo runner - around Trevor's age - was being chased by an old guy. Trevor shot a flare gun into the old guy's eye. The body had to be dumped into a lake during the flight. Trevor asks Lamar about him and Franklin. Lamar - still thinking Trevor and Michael are possibly gay - goes on about a story where they were both having sex with a girl and touched their penises together accidentally. Trevor thinks that's a weird way to meet but Lamar corrects his story that it was actually JB with him who is currently a crackhead (see Tonya stranger missions). Lamar and Franklin met in High School. They got by on the streets but Franklin always had higher aspirations. 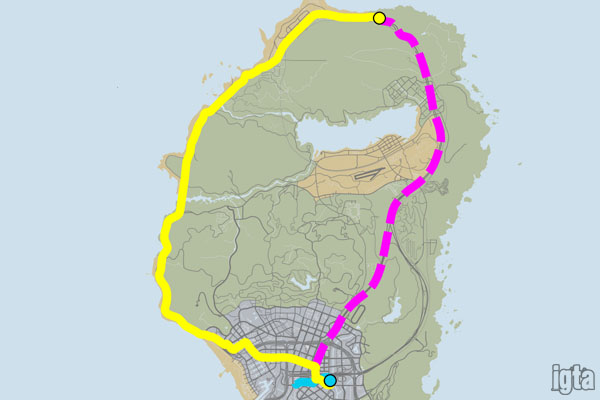 Back to the spy gadgets

Three miles out from the drop-off you'll get a 2 star wanted level. Franklin wakes up and decides to use the JB700 to get rid of the cops tailing them. Keep the truck steady for Franklin as he climbs across the trailer to get the spy car. Of course this happens in winding part of the road so look out for sharp turns and other vehicles. The cops will announce that they know the vehicles are stolen and have been tracking them since the car was picked up. Lamar's theft wasn't so smooth afterall.

When Franklin reaches the car SWITCH to him. The trailer ramp lowers and Franklin backs off into the road. Hit the gas and get rid of the pursuing officers to defend the truck. The car now has forward-facing guns as well as the spikes. Get rid of them all before reaching the drop-off point. When you are clear Franklin calls Molly. She knew the movie studio insurance company was pressing police to find them after taking the spy car. She and her crew are waiting at a truck stop. Follow the truck there. When the truck is safely parked go meet Molly.

Molly informs Franklin that Mr. Weston does not want to be seen with them because of the drama caused. Franklin wants to know where the money is. Molly speaks highly of Weston's investment skills but Franklin doesn't care and informs her that Weston won't be falling in love with her. He wants to know where his money is. Molly says their money will be invested and funds given out periodically to avoid attention. Franklin thinks they have been robbed. Molly calls him immature and leaves with the truck.

After this mission Franklin calls Lester to find out where Michael is since Weston is his contact. Lester looks at his phone and credit cards but sees no activity. Michael was last known taking a flight to North Yankton. He could be in trouble so Franklin should talk to Trevor since he was likely with Michael. Lester will actually call Trevor and explain that Franklin needs to see him since the contact is withholding payment and Michael can't be found. Trevor says he knows nothing about Michael but the payment issue is his too since he took half the cars.