On the front lot of the dealership, Simeon is once again claiming racism with a potential customer and claims he is a mentor to Franklin. He tells Franklin he needs a vehicle repossessed from a kid named James De Santa before he wrecks it and no longer needs to pay the massive interest rate. He sends off the "future lawyer" to Rockford Hills and gets back to customer Kenneth. Franklin walks away. 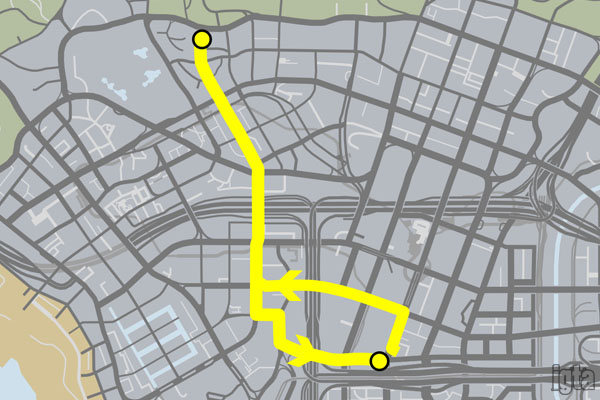 Get in a vehicle and head to the house where the SUV is being kept north of Downtown. Eventually Simeon calls and questions where his motorcycle went. He heard his Employee of the Month took it. Franklin tries to explain that he and Lamar were going to get it back to him but Simeon will talk about it later. He informs Franklin that the SUV is in a locked garage so he'll need to gain access from inside the house.

The gates to the property are locked so you'll need to climb over the walkway gate. A gardener is using a leaf blower to the left and you are told to take him out quietly. Stealth instructions are shown and also how to perform a stealth kill. Do it and go to the house. Of course the garage door is locked so make your way to the south side of the house. A truck is in the driveway and above it is an open window. Climb onto the truck then to the roof and over into the window.

Inside the bathroom you are told to not alert the residents. Enter stealth and make your way downstairs. The boy is talking smack while playing a video game and the girl is on the phone complaining about her brother. Neither will see you walking by their doors. Go down the stairs and make a left. A woman and her coach are in the kitchen. They won't see you either while sneaking by to the left. Enter the garage and hop in the SUV. The garage door will automatically open and you can leave through the driveway gates. Take the vehicle back to the dealership. Franklin calls Simeon who says he can have it sold again before the day is over - assuming it actually comes back this time.

Just after the phone conversation the red blanket in the back seat moves away and an angry man - Michael - puts a gun to Franklin's head. He tells him to keep driving and that the whole thing seems like a credit scam. Franklin says he just works the repos and Michael admires his work ethic. After a little more conversation Michael says he will work it out with Simeon. Stop in the marker across the street from the dealership.

Michael orders Franklin to run the vehicle through the dealership windows or he'll shoot him in the head. Given the options Franklin cooperates. Hit the gas and aim for the corner window. As soon as you hit it a cutscene takes over. A disoriented Franklin exits the vehicle as Simeon runs over wondering what the hell is going on. Michael gives Franklin some cash and tells him to leave. Simeon prepares to fight Michael.

Now playing as Michael, you are told to beat up Simeon. Hand-to-hand combat instructions are displayed. Use a combination of punches and kicks. Eventually Michael pins him against the SUV and questions the deal his son made with a little force. He then shoves Simeon to the floor and leaves. You are left in control of Michael.

After this mission you can now SWITCH between Michael and Franklin. If you quickly SWITCH to Franklin, he'll be on the phone with Lamar discussing how they just got fired. Hobbies and Pastimes are also now available.