Barry is a marijuana legalization supporter. He wants to get even more support from the people by publicly denouncing the government/corporations and handing out free samples of his homegrown pot.

A man named Barry is found in Legion Square in Downtown LS sitting at a makeshift table with pro-marijuana signs. He preaches to Michael that the failed vote to legalize weed was rigged. A working democracy lets intelligent people do what they want. Michael has better things to do but Barry offers him a drag on a joint. Michael says he isn't a drug user but Barry says it's his own brand grown himself. No crazy side effects just a path to nirvana. Michael gives up and takes a hit with Barry lighting the joint. Barry says it's a pure, mellow high... but he does get concerned about the monsters. It's probably nothing serious. Michael's vision and hearing begin to warp.

With the screen still in a haze you are now put in control of Michael who is wielding a Minigun. You are told to kill the aliens that begin spawning in front of you. They run towards you but stop a distance away to shoot a hurtful beam of light called a psychic blast that can cut through armor. If they aren't stopped they will get closer and try to abduct Michael which rings him high into the sky before falling to his death. You'll need to move the left analog stick side-to-side quickly to break away from abduction. Kill the aliens before they kill or abduct you. When the aliens are dead they fall to the ground and disintegrate in fire. The first wave appears in front of you (north side of the plaza). Kill ten of them to stop more from spawning. Now more will appear behind you (south side). They spawn on the ground and on top of the structures. One or two may spawn almost behind you high up. After killing 25 more aliens the screen will go white.

Michael is returned to a conversation with Barry ranting about liquor companies pushing weed prohibition. Michael asks what happened but Barry doesn't know what he is talking about. Michael tells Barry to stay away from him and walks off.

A man named Barry is found in Legion Square in Downtown LS sitting at a makeshift table with pro-marijuana signs. He asks Trevor for a signature on his legalization petition but Trevor - oblivious to the signs and needs to be told it's for marijuana - tells Barry he makes a lot of money from the drug trade and legalization is not something he wants. Barry offers Trevor a drag on a joint but he says he stopped since it interferes with the speed (meth). Barry says it's really good stuff. Trevor gives up and takes a hit with Barry lighting the joint. After a few seconds Trevor's vision and hearing begin to warp. He spots colorful clowns across the plaza.

With the screen still in a haze you are now put in control of Trevor who is wielding an Assault Shotgun. You are told to kill the clowns that begin spawning in front of you. They dance, shoot flower guns (standard pistols and rifles), and eventually spawn from vans. Kill them before they kill you. When the clowns are dead they fall to the ground and disintegrate in purple clouds with cartoon strings shooting outward. The first wave appears in front of you (south side of the plaza). Kill ten of them and a van will appear. Destroy the van or else clowns will continue to spawn from it. A second wave appears in front of you with some behind you. Kill ten more clowns and another van will appear in the middle of the plaza from the west. Destroy it and yet another van will appear in the middle from the east. Destroy that one and a third wave appears in the north side of the plaza. A van will appear a short time after and a second van will spawn after the first right next to it. Move up while killing 5 individual clowns and destroy the vans as soon as possible. Now a final wave will appear back in the middle of the plaza. After killing 10 more clowns the screen will go white.

Trevor is returned to a conversation with Barry ranting about oppression. Trevor asks what happened saying it was horrible and runs off as Barry tells him to think about what he said.

A man named Barry is found on Sinner Street in front of a Ranch store in eastern Downtown LS. He tries to recruit Franklin for a smoke-in demonstration that will bring down the government. Franklin is all for being a martyr just by smoking weed. Barry asks if he wants a warm up smoke before getting supplies. Franklin questions what supplies but Barry says they can't have a smoke-in without smoke. Good stuff that will get people up in arms to protest. Barry takes a drag on a joint and offers it to Franklin who also takes a long drag. Franklin thinks it is a little dry but Barry asks if he can see the aliens. Franklin wonders what else he's on a drops the joint on the ground. Barry tells him to get the stuff and Franklin walks off. As you leave the area Barry says he'll text Franklin the locations. Watch out for the cops... and the monsters.

Not long after you leave Barry you'll get a message from him. The stash locations will now be marked on your map with green search areas. Unlike other search areas used in the game you'll actually need to get close to the stash vehicle for it to appear on your radar. The next two missions will now become available involving each location. The stash vehicles need to be acquired and driven to Barry's apartment. 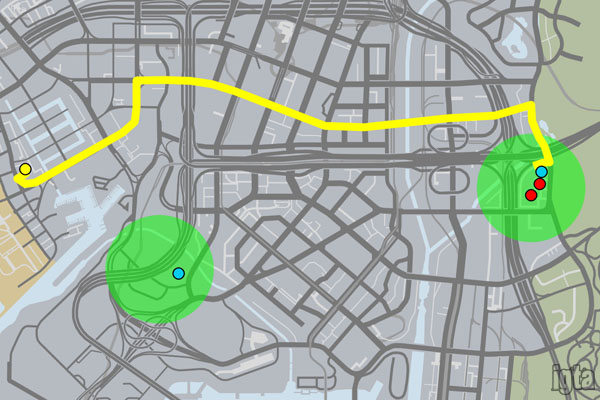 One vehicle is an old pickup truck located in a lumber yard in East LS. Find the truck at the northern end of the lot. Franklin calls Barry to say he found it. Barry tells him he needs it in a few hours and to watch out for cops since they have been snooping around. A countdown timer starts with 4 minutes. Get in the truck and take it to Barry's apartment in Vespucci. There are two undercover cop cars in the lumberyard. One is just south of the truck on the other side of a wall. A second is hiding down an alley in the southwest area of the lumberyard. When either sees you in the truck you are given a 2 star wanted level. Get around them or lose the heat however you can and get to the apartment. Park the truck in the marker and exit. Franklin calls Barry again to confirm it is there. Barry asks Franklin if he was followed but everything is clear now. Barry can't come outside until he knows that for a fact. He also ate a bad burrito which is keeping him inside. After hanging up leave the area to complete the mission.

Another vehicle is a car in a scrapyard in South LS. Find the stash car towards the left in front of a building. Get in and Franklin tries to start it. After a few attempts it's obvious the car isn't going anywhere. Franklin calls Barry to inform him of the trouble. Barry convinces Franklin that the car is very important and he needs to get it out of there however possible. Lucky for you there is a tow truck parked near the yard entrance. Go get it and hook the car. Now take the car to Barry's apartment in Vespucci. Drop it in the marker. Franklin calls Barry to confirm it is there. Barry can't come outside since satellites are scanning everyone's brains and tracking heartbeats through the internet. He says Franklin is a hero, though. After hanging up leave the area to complete the mission.

Over a week after getting both stash vehicles for Barry he'll send Franklin a message reminding him about the smoke-in. Head to City Hall at the northeast corner of Downtown LS. Walk up to the empty stairs in front and Franklin calls Barry. Franklin is alone at City Hall wondering where Barry is. Barry - sounding dazed and a bit confused - says he will be there soon. He didn't forget. He was just busy. Franklin is disappointed in himself for trusting a person like Barry.