Upon entering Michael's driveway you are given a quick tour of the house. Continue to the front door to actually begin the mission. Inside the kitchen his wife Amanda and daughter Tracey are arguing about a boy staying over. Michael goes into the backyard and relaxes by the pool. While staring off into the sky, Franklin pops into view. He's looking for the drink Michael had offered him but Michael says he was joking. No matter. Franklin is invited to sit and explains his job - or former job now. His reason for coming over is to look for work. Michael gives the young gun some advice - give the shit up. Michael is doing well at the moment because he got lucky. He decides to buy Franklin a drink. There's a bar not far from the house and they'll take his wife's car.

Start walking to the car. On the way son Jimmy calls and tells his father that the yacht he loves has been stolen and is going down the Western Highway. Jimmy admits he was trying to sell it for money but the buyers didn't want to pay. Michael loves his boat more than his son and decides to get it back. Franklin offers to help. Jump in the car and take off for Pacific Bluffs. During the ride Franklin learns about the trouble kids are. 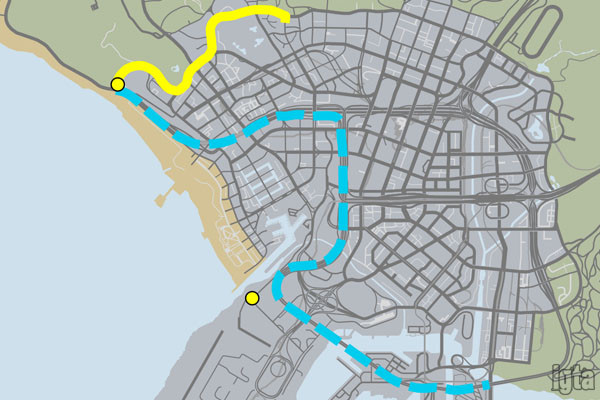 Fish out of water

When you get to the highway you'll see a tractor trailer scream down the road with Michael's boat. Chase after the yacht. Franklin asks what the plan is and Michael says his new helper is the boarding party. Franklin reluctantly gets onto the hood of the car. Try not to swerve too much and get up close to the trailer's bumper. Franklin will jump on when you get close enough.

Various vehicles will crash and swerve as the truck barrels down the highway. Keep on it as Franklin tosses enemies off. When you go past Downtown Franklin runs into an issue and you are told to shoot the enemy. Aim for the body on the right and fire away. After a hit he'll fall off. With the bad guys taken care of Franklin gets Jimmy out from hiding. He stands at the back waving but the boom comes loose. Jimmy hangs from it over the pavement as the truck continues moving along the busy freeway.

Two more enemies appear and Franklin ends up hanging from the side. You are told to catch Jimmy. Get your car in the marker under him and hold it there. You'll need to find a time when no cars are in the fast lane. Franklin manages to knock off one enemy and the other starts climbing the boom to pound on Jimmy's hands. Once Jimmy falls into your car you'll need to rescue Franklin who climbs back up. Get back behind the trailer and Franklin will jump over.

With the boys rescued the car breaks down as the truck speeds off. Michael is quite upset that his precious boat is lost. Franklin knows a chop shop near the airport that can fix the car. Turn around and head for Los Santos Customs. Michael can't believe his boat is gone and what his son did to cause all of this. Jimmy is equally upset that his father cares more for the boat he doesn't use.

Michael tells Franklin to fix the car and take his son home. He wants to hit the road in peace. Franklin calls a cab to pick him up at the shop. Although his son lives a useless life, Michael admits the boat was more for visual relaxation and he didn't use it very much. Pull into the lot. Michael gives Franklin a couple thousand dollars to use for the repair and hops into a cab. A quick tour of the customization shop is given. As Franklin, pull into the garage. Repair the vehicle and add whatever else you want within your new budget. Exit the shop when you are done.

Take Jimmy home and try not to scratch up the car. Jimmy gets to know Franklin and tries to figure out what went down with his SUV and the dealership. Franklin doesn't want to tell Jimmy what his father won't. Bottom line Franklin is now jobless and needs work. Michael seems like a good opportunity. They discuss employment which is something Jimmy doesn't know much about. He knows more about video games. 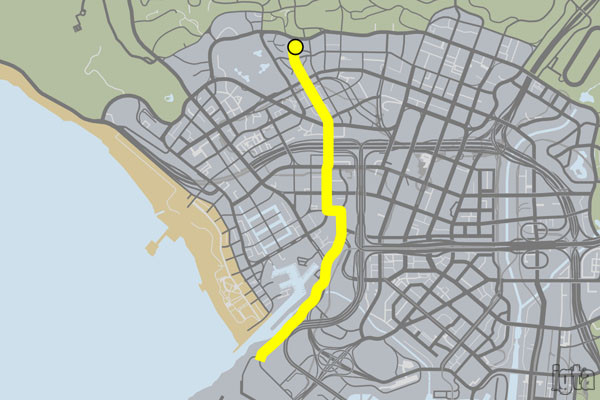 Pull into the driveway to trigger the cutscene. Jimmy offers to hang out with his fellow unemployed brother-from-another-mother whenever he wants. Franklin has his number and tells him to take it easy on his father. The two part ways.