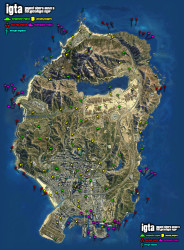 There are a total of 50 Spaceship Parts to collect in GTA V to unlock the "From Beyond The Stars" Achievement/Trophy and obtain 100%. In order to start collecting these, you have to finish the mission, "Fame or Shame". While playing as Franklin, there should be a question mark on your map in Sandy Shores. You will meet a strange fella that goes by the name, Omega. He wants you to collect Spaceship Parts from a crashed UFO.

It doesn't matter which character you use to collect them after initiating the quest. Trevor's piloting skills do come in handy on some of them so keep that in mind. So without further delay, let's get right to it!

CLICK ON THE IMAGES for a better view. and CLICK on the image to the right to see the entire map of collectibles.

Los Santos International Airport
Behind the Hangars on the Southermost part of the Airport.

South Los Santos
Right next to the Watts Towers.

Port of Los Santos
On top of the pipe that connects 2 giant tanks at this location.

Port of Los Santos
The part is underwater. Can't miss it if you're near the spot on the map.

Palamino Highlands
On top of the middle rock structure in this area.

East Los Santos
It's in the middle of a catwalk above the water.

South Lost Santos
On top of the Hospital, next to the helipad.

South Los Santos
Underneath the highway, in the Hobo Town.

Vespucci
On the top of the Vodka Billboard on top of Liqour Hole.

Backlot City
On top of a building at the movie lot. Use large staircase in the middle next to all the cameras.

Richman
At the Golf Course, on the island in the Southernmost pond.

Vinewood
In the empty pool on the rooftop. Use a Helicopter or Parachute in.

Vinewood
Approaching from the East, take the left under the building. The part is by the bushes.

Downtown
Grab a Helicopter, it's on top of the Penris building.

Downtown
This one is in the underground tunnel. Use the entrance a block west on the Highway.

Downtown
Down a Market Street, next to the Bean Machine.

Tataviam Mountains
Underneath the Pier.

Tataviam Mountains
At the bottom of the giant pipes.

Tataviam Mountains
On the Northern side of the arch.

San Chianski Mt. Range
Underneath the surface, in the Northeastern end of the cave.

Sandy Shores
At the top of the Hippie Rock.

Sandy Shores
Underwater, in the middle of the Bay leading out to the Alamo Sea.

Sandy Shores
On the West Side of the Rock Formation.

Grand Senora Desert
Climb the Satellite on the West side of the group.

Great Chaparral
Behind the Rundown House.

Grand Senora Desert
In front of the Weclome Banner.

Great Chapparal
At the bottom of the Cliff right next to the road.

Vinewood Hills
Get a Helicopter. Land on top of the Circular Tower.

Vinewood Hills
In the water, right near the center of the Dam Wall.

Vinewood Hills
Next to the Dome on the East side of the Observatory.

Tongva Valley
On the South side of the Bridge, at the foot of the Waterfall.

Tongva Hills
Down a Row of Grapes. Approach from the East.

Banham Canyon
Follow the Stream from the road on the East. Look for a Cave on the North Side of the Steam.

Vinewood Hills
Next to the Tree in the Center of the Parking Lot.

Banham Canyon
In the Backyard.

Mount Josiah
Underneath the Wooden Bridge.

Mount Josiah
By the River Bank.

Mount Josiah
Near the peak on the first set of Cliffs in the area.

Raton Canyon
Below the Bridge on a Rocky Island.

Raton Canyon
Get in a Helicopter and SAVE by the Bridge. This could take a few tries to Land on the Bridge's Support Beam underneath the Bridge.

Chiliad Mountain State Wilderness
On top of the Giant Rock.

Paleto Forest
Underneath the Bridge on the Dirt Path.

Paleto Bay
On the Third Story of the Structure.

Mount Chiliad
Inside the Barn.

Mount Chiliad
Inside the Barn at the Marijuana Farm.

San Chianski Mountain Range
Inside the Barn with the Boat next to it.

Grapeseed
In the middle of the Cow Pasture.

After collecting all of the parts, a new Mission will pop up called, "The Final Frontier". At the end of the cutscene, Omega leaves you his modified BF Injection, the "Space Docker", as a reward for collecting all of the Spaceship Parts.
All content created by and property of iGTA5.com and must not be reproduced without express written permission. © 2011-2022 iGTA5.com