Omega is a paranoid conspiracy theorist out in Blaine County. He claims to have been visited by aliens and wants to convince others to believe in extraterrestrial life.

In the eastern desert of Sandy Shores, Franklin finds a man using a strange device. He tells Franklin to stop and inspects the intruder with the device while recording his verbal checklist. The device ends up failing but Franklin checks out. The man - named Omega - greets CBL (Carbon Based Lifeform) and asks if he has seen them. Franklin has no idea who them is. Omega gives quite a story about encountering aliens. They were going to abduct Omega but the ship crashed. He is now looking for the pieces of the wreckage. Franklin thinks Omega is crazy but will tell him if he finds any.

Back in control of Franklin you are told to leave the area. Do so. Spaceship parts can now be found scattered around the map. You need to collect all 50 for Omega. The nearest one is north of Omega on top of the colorfully painted hills.

The following map shows where to find the 50 spaceship parts. More detailed guide here. All three protagonists can collect them. 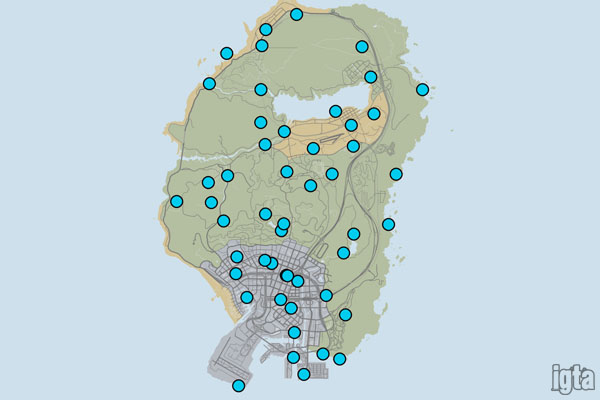 Once all of the spaceship parts have been found, Omega sends a text message to Franklin telling him to meet at the "control center" next to the wind farm. Omega is found around some trailers looking for something he lost. Franklin presents the final spaceship part and Omega brings him inside a shed. Behind Omega's personal Dune Buggy (called the Space Docker) are all the other part containers. On a table is a small polygon shaped object. This is the spaceship. It's small but very advanced. Omega activates it and the tiny ship floats in the air for a few seconds. Omega thinks he's convinced Franklin enough and walks out. The mission is now over. You can take Omega's Space Docker if you wish. It makes space noises and has lights wrapped around it.