Back on the streets

Franklin enters his house to find Aunt Denise and her friends yelling like crazy people. She says they are revigorating their femininity and tells him to leave. Franklin gladly walks out as Lamar and another person walk up to the house. Lamar hypes the return of their old friend nicknamed "Stretch" but Franklin isn't exactly thrilled to see him. The two exchange some smack talk which gets a little heated but Lamar intervenes. He tells Franklin they are going to take care of some business and Franklin is driving. 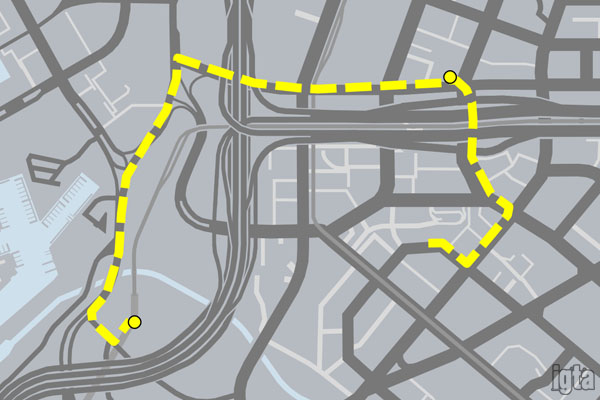 Hop into the car and drive the pair to Ammu-Nation. Stretch talks about how Franklin and Lamar were little when he went to prison. They might be grown now but Stretch is still older and demands respect. Park at Ammu-Nation and go inside. An introduction to the store and options will be shown. Lamar tells you to buy a shotgun with flashlight attachment - since Lamar and Stretch have felonies on their records. Walk up to the counter and make the purchase along with any other available weapons or options you want.

When you are done go to the meeting at the recycling plant. On the way Lamar tells Franklin the meeting is for a drug deal. Franklin has a feeling it's a deals-gone-wrong thing. Stretch complains about Franklin's negativity and the two continue to smack talk. Stretch says the hood has changed but Lamar has ideas they'll discuss at a later time. Pull up to the back door of the plant and go up the stairs inside.

In a room upstairs the group finds D. He's happy to see Lamar even after the whole kidnapping thing - which Franklin quickly points out. Stretch greets D but before the deal begins some noise is heard. D claims it's a TV crew documenting drug intervention but Franklin spots vehicles outside packed with Ballas. The deal is a setup. Hardened thug Stretch puts a gun to D's head and fires away.

Move through the building with Lamar and Stretch to find an exit. In the next storage room two enemies will come from the left elevator about halfway down. Shoot them and two more enemies come from the doorway at the far end. Kill them and move through the hallway where a health pack is on the floor if needed.

When Lamar approaches the next set of doors they blow open and two more enemies step in. Shoot them and continue into the room where a lone enemy waits and three more enemies are in the back-right of the room. Clear them out and go into the stairwell. Start going down and an enemy will appear on the second landing. Shoot him and continue down.

In the next hallway two sets of two enemies will run in from a doorway at the end. Kill them and around to the next set of doors. On the other side is a warehouse with plenty of enemies scattered around with one elevated on a catwalk on the far side. Clear them out and another group of three enemies will run in from the back-left. Kill them and to the doors where a health pack is on the wall. Go through the doors and be ready for two last enemies.

Unfortunately the cops get word of the battle. You now have a 3 star wanted level. A police helicopter hovers outside the exit doors. Take it out however you can. Escape the junkyard by climbing a nearby ladder. Another police helicopter will fly in as you follow Stretch and Lamar across a roof. You don't need to take it out but it is a good idea as ground units are still not on scene.

Once you drop down onto the pavement hijack the nearest vehicle. Police cruisers will roll up so make your escape quickly. Stretch will shoot back at the police while saying the story is he was picked up on the side of the street. Lamar will also put his gun to use out the window. The game will inform you about using alleys and switching cars to hide from police. Escape their sight however you wish and wait for them to give up the search.

With the heat lost drive to Franklin's house. Stretch tells Lamar that he should have known something was going to happen after starting trouble with the Ballas. He'll attempt to talk with them soon. At the house Franklin says he needs money not a death wish. Stretch and Lamar walk off as a couple more insults are shared.