As Franklin approaches his front door it opens. His Aunt and a friend slow jog out. Aunt Denise doesn't make it very far before needing a breather. They continue on while yelling a feminist chant. Lamar walks up with his dog Chop wondering what they were doing. Franklin says she is spirit walking. Lamar needs to pick up some things around the block and tells Franklin his fat ass needs the exercise.

After they start walking Lamar explains that he plans on kidnapping a Ballas gang member named simply "D". Franklin really doesn't want to get involved with more gang activities although his Aunt would rather get the house to herself. A white van is parked in an alley a few houses from Franklin's. Lamar tells you to drive. Get in and wait for Lamar to get Chop in the back before hopping in himself. When they are set start driving for Vinewood Blvd.

During the ride Franklin mentions his new contact Michael and how he could be their ticket to the big league. Lamar is reluctant to use Michael and says this kidnapping should rake in $40,000 for the ransom. Franklin still does not want to start a beef with the Ballas but Lamar says they'll keep their disguises on so no one will know exactly who it is. Drive up to the marker in front of an alley where D should be hanging around. 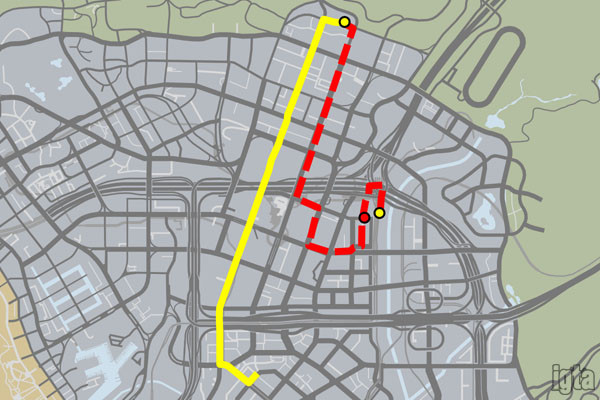 D-lightful day for a chase

D is shown along the rear wall trying (and failing) to get a girl while sitting on a motorcycle. Franklin and Lamar almost walk out in front of him but quickly go back around the corner to put on bandanas. They walk back out and Lamar interrupts the conversation pretty much saying they should be getting the girl and not D. The girl wants nothing to do with any of them. D talks more smack and Lamar brings out his gun again. With that, D quickly starts up the motorcycle and speeds past the two green thugs.

Get back in the van and chase after D. Much like the other chases there will be plenty of vehicles to navigate around. The van doesn't handle like a sports car so don't oversteer. Use Franklin's special ability if needed. D goes through Downtown and ends up wrecking at a bus depot. Pull up to the scene and Lamar tells Franklin to take Chop to go after D. He does so and takes control of the van.

Follow Chop who is chasing D. You'll end up going through the bus depot, down into a parking lot, and then smash through a fence into the rail yard. After hopping over a few train cars D grabs hold of a moving train while another passes in front. Continue to follow Chop and you are given the option to SWITCH to the dog's perspective. Franklin will automatically follow Chop's movements during that time.

Back as Franklin you are told to search a couple boxcars. Nothing is found in either. Chop puts his nose back to work and after a few seconds runs off barking. To Franklin's disappointment, Chop has something else on his mind instead of D. Run over and break up Chop's afternoon delight. Franklin tries to tell Chop it's a dude anyway. The game reminds you of the real life iFruit App which will let you train Chop.

Search another set of boxcars. You should find D in the first one. He runs and Chop goes after him. Follow them and Chop will take down D just inside an archway. In a cutscene Franklin grabs D and Lamar brings the van over. Lamar isn't wearing a bandana so D recognizes him as Franklin shoves him into the back of the van with Chop for company. Franklin jumps into the driver seat.

Drive to Lamar's house where they will hold D for the time being. D reveals that he was there when Lamar was in diapers and that Lamar was always dumb. He also says the green pair will get shot before they ever get a penny for him. Lamar continues with the plan and calls someone from the Ballas. Franklin complains that they now have his cell phone number and can trace it. 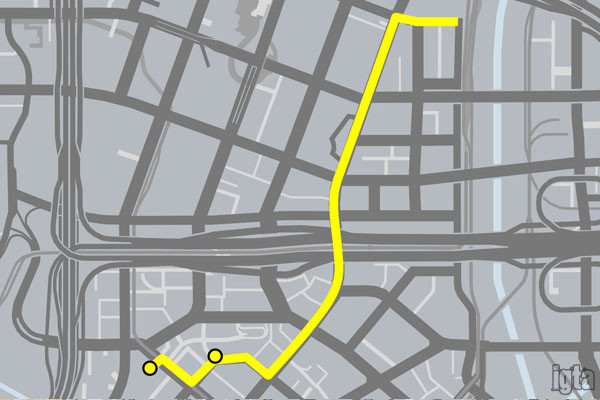 Stop the van wherever you want. Franklin tells D to get out and smashes Lamar's phone. D will see them again but Franklin says only because they went easy on him this time. Lamar requests to be dropped off at the rec center. Drive there and into the parking lot. Franklin tells Lamar the Ballas or cops will get him but Lamar disagrees. He takes Chop for a walk and leaves Franklin with the van.