Eye in the Sky

The full mission begins with Trevor. Go to the LSPD Precinct in Downtown LS and walk inside to the police front desk. Trevor tells the cop at the front desk Devin Weston sent him and is told the helipad is on the roof. Go through the door opposite the entrance toward the right which brings you to the stairs. On the roof (level 4) enter the helicopter for the ride along. The pilot takes off and you are given a guide of how to use their advanced driver's license scanner. Point the scanner in the direction you want to go and zoom in/out for a better view of your targets.

Point the scanner towards Franklin out at the FIB lot in East LS. The pilot questions if this is research for a movie or TV show but Trevor admits he has nothing to do with the film industry and that he's actually a criminal. The pilot isn't completely sure what's going on but Trevor goes over their plan of finding an expensive car. When you get to Franklin scan him when in range. Mr. Public Exposure says his peace about the police and then tells Trevor to get over to Hawick. Franklin will drive over that way.

Aim towards the four marked targets in Hawick. Along the way over Trevor tells his pilot they disgust him but the pilot attempts to state his case. When you reach the targets begin to scan them. You'll find one guy loading a truck, two other fighting on the edge of a rooftop, and a woman below those two. Listen in on the conversations if you wish. None are Chad Mulligan. Trevor tells Franklin he isn't around and Franklin says to check east of there. Swing over to the seven new targets and scan them. Chad is talking with a girl in the northwest part of the block.

Follow Chad Mulligan to find his car. He'll walk south through the buildings so you may lose sight but wait for him to reappear. Eventually he opens a garage and Franklin pulls up to steal the car. Chad jumps into his Z-Type and drives off. Follow the car so Trevor can give directions to the Franklin. He drives out in Rockford Hills making plenty of quick turns and causing a few accidents. Chad will end up driving into a parking garage and Trevor tells his pilot to get lower so he can see into it.

Alongside the building Trevor can't see anyone but the pilot suggests using the thermal vision. Switch that on and look for Franklin in the middle of the building waving his hands. Zoom in to confirm him as a person of interest. Now look around the rest of the building at other visible people. Zoom in to confirm a potential target and Franklin will investigate. Chad is all the way to the left behind a van. When Franklin investigates you will be SWITCHed to him. He aims a gun at Chad who backs off. Kill him or let him live - it might be wise to kill him.

Get in the Z-Type and start to head out. Franklin calls Molly to confirm he has the car and she says to bring it to Weston's personal hanger at the airport. She'll tell security to expect you. Drive to the airport and try not to damage the car. Franklin calls Trevor and fills him in. Trevor wants to send a hello to Molly but Franklin doesn't think they are a good match. If you didn't kill Chad, when you get near the Maze Bank Arena you'll be given a 2 star wanted level. Lose the cops and continue on to the airport. 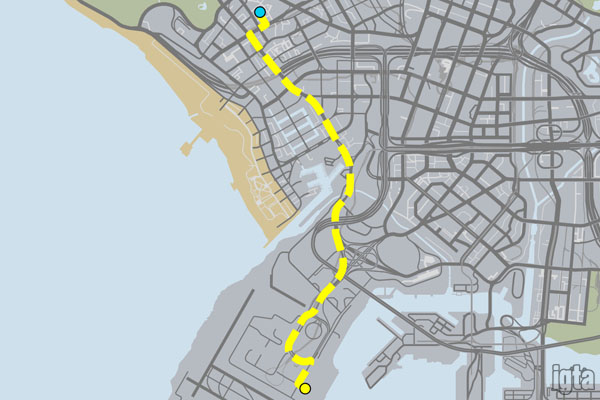 When you reach the marker in the hanger Weston walks over and expresses his love for the car. He seems to like Franklin over the other two and doesn't hold back on his opinions. He gives Franklin advice in the form of gloating about his own rich life. Molly tells Franklin to take any car and leave and the group gets on Weston's private plane. Take one of the three Tailgaters and head to the airport exit.

After this mission Michael will message Franklin about another job opportunity with Martin Madrazo. He and Trevor will take care of it. Trevor receives a message from Madrazo directly about the job after kicking out the LSPD pilot over the precinct in Downtown LS.