Franklin calls Molly outside a Vinewood movie studio (the one owned by Solomon Richards). She tells him to climb the wall and find the car they need. Only select cast members are allowed near the car so Franklin can either get a disguise from wardrobe or try something else. He should call Molly back when he is in the clear with the car.

Hop the gate into the studio and find the actor. He'll be yelling at an assistant over a salad before sending her away. Note there is a security guard at the vehicle gate to the left so don't get into his view. Sneak up and stealth kill the actor to prevent alerting security. Franklin will drag him into a trailer and come out with his costume on. Get in the car located around the corner on the movie set. The director wonders where Brandon is as you walk up and questions if you are actually a stunt person. As soon as you grab the car your cover is blown. Drive off the lot and get to the garage. 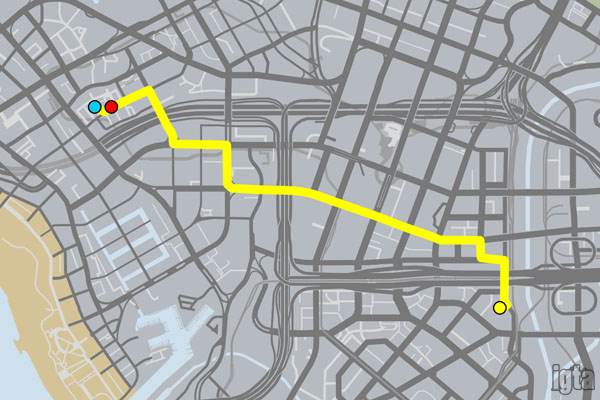 The actress becomes distressed when it becomes more obvious that Franklin isn't Brandon. She'll grab the wheel to steer the car erratically as security comes after you in two cars. Franklin and the actress have some discussion about the car's value and her talent during the drive. To get rid of security Franklin finds a button labeled "spikes". Use it and watch each chasing car get taken out one at a time. The actress insists on being returned to the studio but Franklin eyes a certain red switch. Hit the switch and watch the actress get ejected from the roof.

Now that it's quite Franklin calls Molly. She tells him to bring the car to Hayes Auto. Mr. Weston is marathon training but can meet Franklin there. They plan on refitting the guns to take live ammunition and Franklin confirms the spikes and ejector seat need replacing. Finally Molly mentions that a suspicious figure has been seen around the garage and tells Franklin to keep an eye out. Park the car inside the garage where Weston is waiting.

Franklin says the job went pretty smooth. Weston reveals that he is a major share holder of the studio so technically nothing was illegally stolen. Lamar enters the garage making his love for the car known. Franklin wonders what he is doing here but Lamar says he got Franklin's GPS location from speed freak Trevor. Weston introduces himself to the new homie and offers to give him a job as well. Franklin would rather get his money and let Lamar do the rest but Weston sees the partnership between them. Franklin walks out leaving Weston and Lamar to discuss world business.