What GTA V PC Mods Do You Want to See?

When some people think of "game mods" they think of people hacking files and causing virtual pain to other players. For the rest of us we think of fun re-imaginings of a current game. Grand Theft Auto offers a ton of content as a starting point for fans to modify. Physics, weather, vehicle/pedestrian traffic, etc. It's no surprise that GTA has quite a large modder fanbase.

While modding goes back to the older GTA titles, the newly used RAGE engine for GTA IV gave players tons of creative space and a few of the more popular mods actually became features of GTA V. This brings us to the question of the article: What mods do you want to see for GTA V on PC?

From full HD snaps to more filters and borders. The Snapmatic feature has been highly successful - a sought after feature from GTA IV's tease - and probably an easier mod to kick off with. Rockstar still hasn't given us a Weazel News overlay...

Who wouldn't want to see wildlife in place of pedestrians? Or completely swap character models to make Lester a psychopathic meth dealer across from a quiet and sensible hacker named Trevor. It could happen.

The Valentine's Day Massacre DLC brought GTA Online closer to L.S. Noire. Many would like to see additional clothing options for singleplayer characters and it seems entirely possible for that happen. Maybe Trevor will get a bikini to go with his sundress.

The genre is kind of overdone by now (and Rockstar has dabbled in it already) but that doesn't stop fans from requesting a zombie or post-apocalyptic Los Santos DLC. Some talented modders even made a new game mode for GTA IV that causes undead pedestrians to seek the player:

Physics Out the Window

More easy and fun mods include changing variables that control the physics of the game. Heavy cars, less gravity, etc etc. How about punching pedestrians so hard they fly off across the city? Perhaps a tsunami will strike Los Santos... or the water will recede completely.

Highly expected. While the vehicles in GTA games are hybrids of real ones, that isn't good enough for some. Look for your favorite rides to become available to download. We'll probably see Franklin cruising in a Dodge Charger alongside Michael in his shiny Audi. Or everyone in the game will be driving Ferraris because you feel like it. Whatever you choose.

It's amazing that a game about crime has a rather large fanbase dedicated to playing as cops. From reskinning cop cars to look like the real Los Angeles Police Department (or other places for that matter) to actual missions beyond classic vigilantes. There are even firefighter and ambulance mods to go with it. 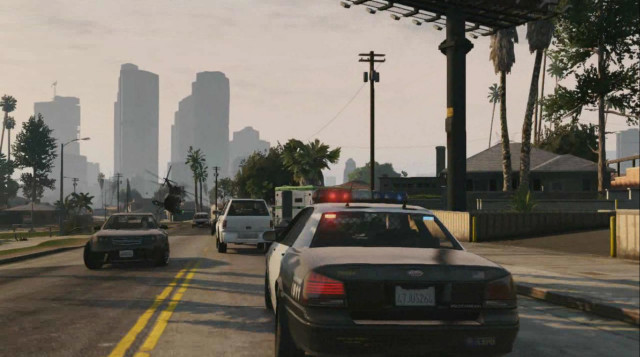 There's definitely plenty of mods to look forward to. What ones would you like to see? Let us know in the comments below or hit us up on Twitter. And if you want to find some friends to play with or share your own mods, check out the forums!
All content created by and property of iGTA5.com and must not be reproduced without express written permission. © 2011-2021 iGTA5.com