A little earlier than stated but that's nothing to complain about. The Valentineâ€™s Day Massacre Special is now available with the latest title update (1.10).

The update includes a variety of fun Valentine's themed extras for Story Mode and GTA Online like the Gusenberg Sweeper machine gun, the new Albany Roosevelt ride, and a host of new attire options like double breasted suits, flapper dresses, sexy undergarments, novelty t-shirts, hats, masks, and more! These items are all available to purchase in GTA Online right now until the end of February - and once acquired they're yours to keep in your inventory for good.

This update also has 10 new Jobs across a variety of modes. Here's a few details...

This Friday, February 14th through Monday, February 17th jump into GTA Online to make sure you redeem the limited-time-only Valentine's Day Massacre Special content and also reap four whole days of in-game rewards, discounts and happenings in the Valentine's Weekend Massacre Social Club Online Event. Tailor up in a new double breasted suit or flapper dress from the Valentine's Day Massacre content pack, grab a trusty Gusenberg SMG and pick up your loved ones in an Albany Roosevelt to paint the town red all weekend long. 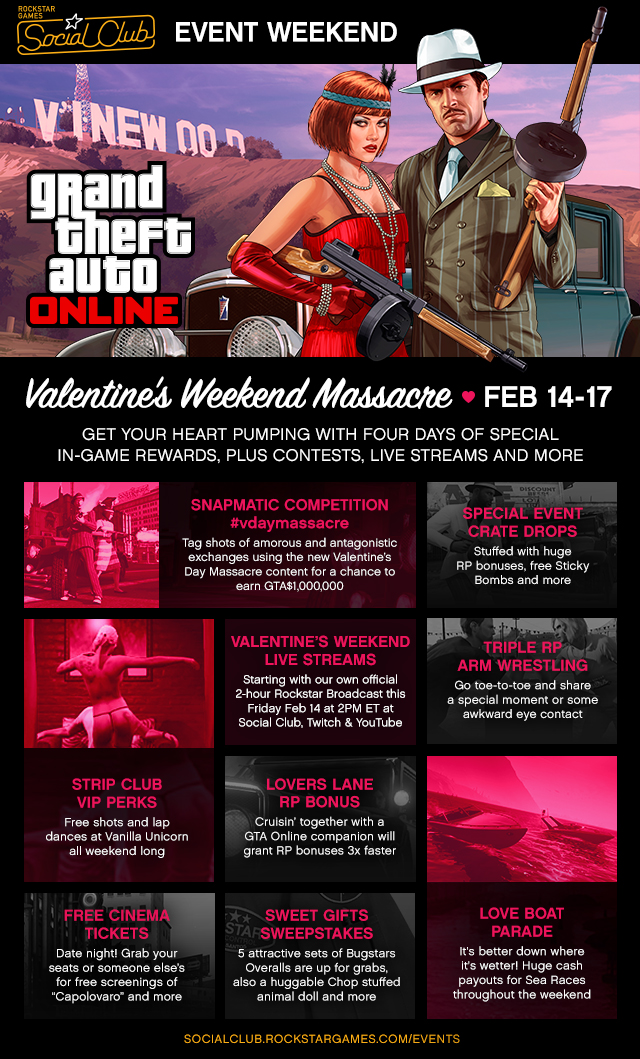 IN-GAME REWARDS
In addition to the limited-time-only Valentineâ€™s Day Massacre Special content that can only be redeemed between Friday, Valentineâ€™s Day through the end of February (but once redeemed, you can hold on to it for good), Rockstar has lined up lots of special in-game rewards exclusively for players this weekend to help you paint the town red.

SNAPMATIC COMPETITION - #vdaymassacre
Share your best Snapmatic shots from the Valentine's Event Weekend and tag them with #vdaymassacre for your chance to win a cool GTA$1M and one of five exclusive in-game license plates (MASACRE, VLNTINES, VMASSCRE, KISS IT, BE MINE). Rockstar Games wants to see the best shots of you and your beloved Crew members breaking hearts with the new Valentine's Day Massacre outfits, car and gun - and taking advantage of the other in-game Event rewards mentioned above. Theyâ€™ll pick their five photogenic favorites to feature at the Newswire and pay out a handsome GTA$1M each.

LIVE STREAMS
Rockstar is kicking off the weekend on Friday afternoon with an epic Rockstar-hosted live-stream which will be broadcast across three different channels: the Social Club Online Events page, the Rockstar Games Twich.tv Channel and the official Rockstar YouTube channel. Head over to Twitch.tv or YouTube now and subscribe for an automatic email notification when the stream begins. During the show, they'll be joined in the studio by esteemed Twitch broadcaster and GTA fan Swiftor who will be playing live along with the Rockstar Devs and members of the Social Club community joining them in lobbies Online. Rockstar will be playing through some of the brand new Jobs from the Valentine's Day Massacre Pack including brand new Last Team Standing, Races, Parachuting and Deathmatches as well as the latest round of Rockstar Verified player-created Jobs. Tune in from 2pm til 4pm ET Friday. Members of Rockstar Games will be online playing on both Xbox LIVE and PlayStation Network as PlayRockstar, PlayRockstar1 and PlayRockstar2, so feel free to look out for them in the lobbies.

There will also be more Valentineâ€™s Weekend Event live-streams happening hosted by some of Rockstar's broadcaster friends on YouTube and Twitch. 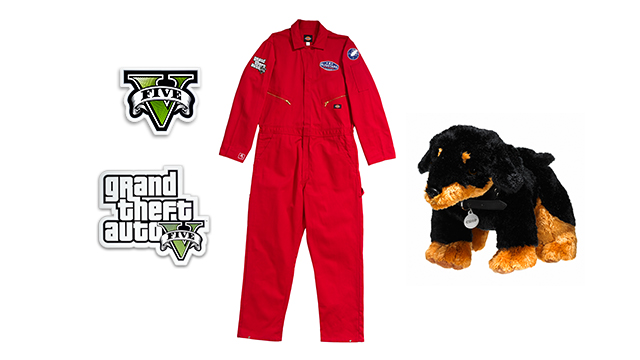 Today's automatic title update includes the triumphant return of the Rat Loader pickup truck to GTA Online. This vehicle and all its mods are available for free until the next title update, so anyone who might have lost one from their garage previously can now re-create it at no cost. Just grab it from the southernsanandreassuperautos.com in-game website and modify it at any Los Santos Customs location. 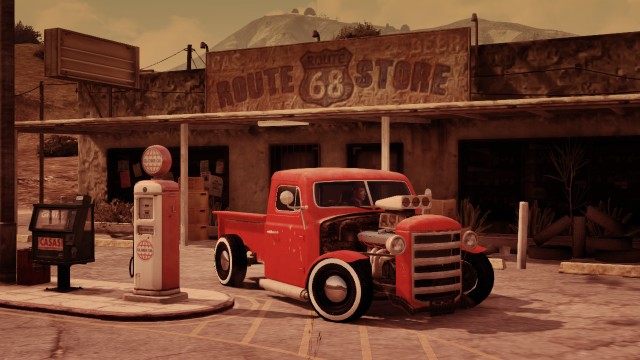 This title update also enables solo players in Races to earn GTA$, plus provides fixes for numerous issues, including incorrect time displays for some players in the Bad Sport pool, issues with the Cornrows haircut and situations where characters would become bald after using a mask. For a complete list of fixes in this update, please check out the article at Rockstar Support.

Enjoy and join us in the forums!
All content created by and property of iGTA5.com and must not be reproduced without express written permission. © 2011-2023 iGTA5.com