The hunter is the quintessential sasquatch killer decked out in various animal hides and definitely looks like he's been out there for a long time.

Note: To access this mission you must complete 100% in Grand Theft Auto V. This mission may not appear right away and could take almost two in-game weeks.

Franklin walks up to a hunter in the Chiliad Mountain State Wilderness. The man is peering through a sniper scope and gets startled by the arrival. He says Franklin is very lucky since he thought Franklin was a sasquatch and would have put a bullet in him. Franklin is surprised to find a sasquatch hunter - mainly because he doesn't believe in it - but the man says he's been out here for eight years and seen the beast a hundred times. He just never had a clear shot. As proof of the sasquatch's existence he shows Franklin fresh sasquatch poop. Wonderful. Suddenly the hunter hears something up the hill and fires his rifle. A person is heard yelling that they were shot and the hunter exclaims that some sasquatches wear orange to make people think they're hunters too.

You are put back in control of Franklin with the hunter saying a picture or stuffed sasquatch head would be good. The scat site is down in the valley. The hunter will cover the cliffs. If he hears a howl he'll know Franklin or the sasquatch found each other. Investigate the scat site. A yellow search area appears on your map. 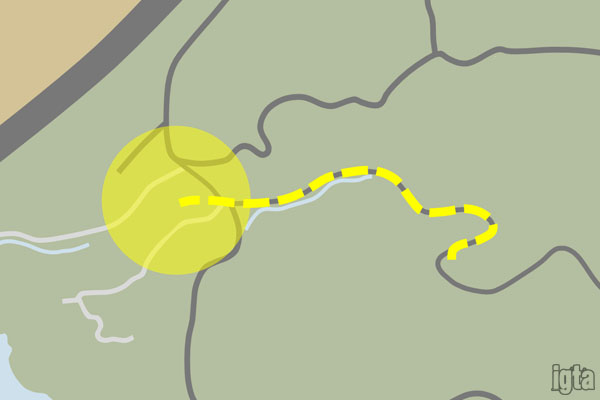 Enter the search area and find the poop pile in the middle. Franklin comments on the zesty smell. Now listen for the howl of the Last One. Its location will now appear on your radar. Kill the Last One. The beast will run very quickly so chase after it. After running a good distance it dives into a bush for cover. When you lose the creature its howls will continue and red sound areas appear on your radar. If you have trouble finding it go to the last known location. When you get close enough its blip reappears a short distance away. Continue the chase and look out for other wildlife - mainly cougars - running around.

Eventually the creature will stop on top of a mountain. Give it a good shot and a cutscene shows it speaking in English to be shot again (the conversation plays out almost the same as Undead Nightmare). Franklin tells the creature it's over. The sasquatch says he's the last of his kind and they've lived in these woods for thousands of years. Franklin realizes that the sasquatch face is a mask and removes it. A man is revealed but continues to tell Franklin to "make it stop". Franklin wants the freak to give up the act and the man goes on to say that it's normal for a person to get aroused by role-playing as a mythical creature. He finishes his speech with a random bark. Franklin is a little confused at this point.

You are put back in control of Franklin as the man continues to make dog noises. The mission ends and you are left to decide his fate.