Josh was a real estate agent in Los Santos who had a partner named Lenny Avery but the two have since split after Josh lost his license. Josh is struggling and needs some help.

A man - Josh - is found inside the gate of a yellow mansion on the edge Rockford Hills across the street from the golf course. When Trevor approaches Josh opens the gate and asks if Trevor would like to buy the house since he's downsizing. Trevor doesn't but Josh then asks him if he likes beautiful things. Trevor does and Josh offers Trevor a beautiful woman to... bouncy bounce with. Josh then explains how he was big in real estate until his license was taken away. His old friend Lenny Avery has now taken all of his clients. Josh wants Trevor to take out all of Lenny's "For Sale" signs. The woman Josh mentioned is well worth it. He closes the gate and walks away leaving Trevor alone.

Shortly after the meeting Josh sends Trevor a text message saying Lenny's real estate offerings are listed on a website given. Go to the website and click "Find Properties". A map is shown with house icons. Click on each to get photos and directions sent to your GPS. Go to the property and remove the sign however you wish. The signs are purple with a white area across the middle. There are 15 signs with no specific order. The nearest property is next door to Josh. 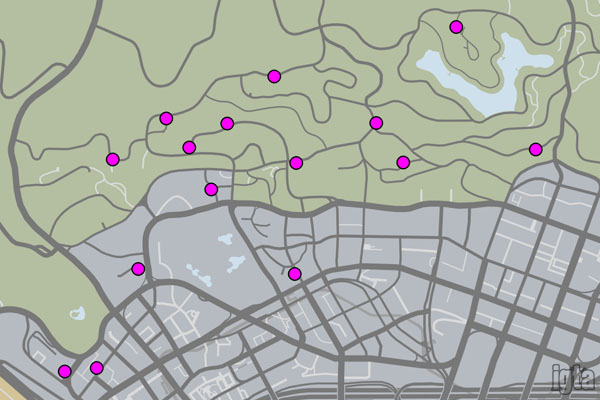 After destroying all of the signs Josh sends a text message saying the lack of signs will make people think Lenny went out of business. He wants Trevor to meet him at the Billingsgate Motel in East LS.

Josh is on some stairs at the motel. He tells Tony the woman is upstairs in room #9. Go up to the room. Trevor knocks and enters. Sometime later he emerges a little happier than before. Josh tells Trevor he wants to give Lenny a wakeup call. He shows Trevor a picture of him and says he'll be doing some showings in Rockford Hills today. Trevor heads out.

Go find Avery in Rockford Hills. Trevor comments how his day has gotten a little better. Eventually Josh calls Trevor to say that Avery drives a green Comet. Trevor confirms that he'll get more bouncy for scaring him. Josh also informs Trevor that Avery knows he's coming. Josh wants Avery to know the person behind his future pain. When you get nearby you are told to find the green Comet. A woman is walking her dog in the street and Trevor asks her if she has seen Lenny Avery or his green Comet. The woman - named Rosalind - loves Lenny and even bought a house from him. He's up the street on the left.

Go to the next house on the left and look in the circular driveway for the green Comet. Enter the driveway and you are told to stop Avery. He drives off in his car out the other side. Chase after him and stop his vehicle without killing him. There isn't an exact route but he usually goes straight up into the Vinewood Hills. When enough damage is done to the car he'll stop. Get out and threaten him by either aiming a gun at him or beat him up a little. Trevor will tell him to stay away from Josh's business or else. Avery gets the message and runs off.

A day after completing the previous mission Josh can be found sitting on the stairs at the motel. He is pleased with Trevor and tells him to get his prize. Go back up to the room. Time passes once again before Trevor emerges. He asks Josh how he knows the woman since he doesn't seem like the pimp type. Josh says it's his wife. He actually left his first wife and kids for this woman. Best decision he ever made. Getting back to real estate business, Josh says his old house where he first met Trevor is in foreclosure. If something happened to the place like some kind of gasoline mishap he could still get the full insurance from it. Trevor understands - the job given but not so much Josh.

Back in control of Trevor, Josh mentions he has a gasoline can in his car which you can use. Get in his car which will automatically give you the jerry can. Now go to Josh's house in his car or your own. Trevor comments on the situation with the wife but comes to the conclusion he would have banged her anyway. Eventually Josh calls Trevor to tell him that there's a gas grill out back. If that lights off Josh will be able to see the fireworks and Mrs. Bernstein will be grateful.

When you get to the house the gate is locked so you'll need to hop the wall. Go into the backyard and get to the marker next to the grill. You are told to pour a gasoline trail which now appears on your radar. Pour out the trail all the way to the gate. When you complete the trail shoot at it to light it off. A cinematic shows the fire run along the trail and blow up the grill which blows up the whole house. Trevor says he should get out of there since it will attract some attention. Climb back over the wall and leave the area. Trevor calls Josh to confirm the hot property. Josh says he'll talk to his other half about schedules and get back to Trevor.

Two days after the previous mission Josh can be found at his destroyed home speaking with two police officers. As Trevor walks up, Josh describes him to the cops as the person responsible for the damage. The description isn't very specific for them and they question Josh's insurance policy on the place. When Josh notices Trevor he points him out. Trevor wonders where his reward is as Josh tells the cops Trevor did it. Trevor tries to explain that Josh asked him to do it but Josh continues to rant until the cops do something.

Back in control of Trevor you are given a 2 star wanted level. The two cops take aim at Trevor and you are told to escape the law. You can either take off or try to kill Josh. Killing the two cops will increase your wanted level to 3 stars. If you run away or kill the cops, Josh will run out the other side of the driveway to his red car and escape. Whatever your choice get rid of the police attention to complete the mission.