Dom is a hedge fund manager and extreme sports enthusiast. His competitive attitude serves in both respects and he loves getting more people involved with his favorite hobby: parachuting.

Franklin finds a dog in the Vinewood Hills. The dog seems upset by the way it barks and Franklin talks to it like Lassie. He comes to the conclusion that someone is stuck in a tree and needs help. He tells the dog to lead the way. Follow the dog down the hill. Franklin continues to talk to it. The person stuck jumped from a helicopter but had parachute issues. The dog's dialogue (through Franklin) becomes a bit philosophical yet comical. Eventually the dog stops with the tree ahead holding up the jumper. Walk over to him.

The jumper - named Dom - greets Franklin and asks for assistance getting down. Franklin compliments his trusty dog but Dom has no idea what Franklin is talking about. Franklin looks around but the dog is gone. Dom is cut loose and talks about the amazing sport of parachuting. Franklin isn't quite into crapping his pants but gets talked into giving it a shot. Follow Dom down the hill a little farther. A helicopter lowers in. Dom tells Franklin they are going to the next level and yells at his pilot Jeff about taking so long. When the helicopter lands jump in the left side. Dom gives Franklin a headset and parachute. The chopper lifts off with Dom and Jeff discussing the previous jump. You can skip the journey if you wish. Dom and Franklin go back and forth about Franklin's prior experience (none), the non-existent dog, and some insight to parachuting so Franklin knows what to do. Eventually the chopper approaches Mount Chiliad which is the target for landing. Dom rambles on while the chopper gains altitude. When it reaches 10,000 feet Dom says it's time to go. Franklin will go first.

In control, jump from the chopper and freefall back down to the ground towards the landing zone. Controls are displayed on the screen. Deploy your chute when you wish. Dom expresses the fun he is having and asks Franklin if he sees the bikes. Franklin questions what bikes but Dom says it's the next surprise. Land on the mountain and grab a bike. Wait for Dom to land and grab the other bike which will start the race. Race Dom down the mountain. The path can be narrow with large rocks on the sides and quick turns right after hills. Plus most of the ride has cliff edges along either side of the path as well. Be careful and stick with it. After getting through the top of the mountain Dom will start to call out jumps here and there. They continue down into the wooded areas. Follow the markers all the way to the finish line on a small bridge near Paleto Forest. 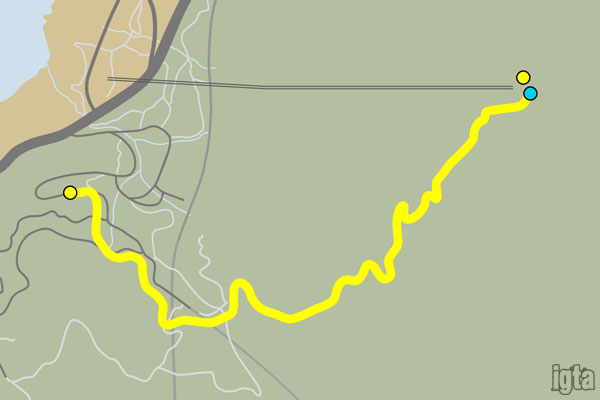 Whatever the outcome of the race, Dom tells Franklin to meet at the airport in the near future. He rides off. Parachuting is now available at designated locations around the map (image down this page).

A short time after completing the previous mission, Dom will send Franklin a text message telling him to get to the airport. When you get there you'll find "the Dominator" sitting on a flatbed with two Blazer ATVs in front of him. Dom says what they are going to do will get him laid by some internet ladies from the Midwest. He goes on to tell Franklin to hurry but ends up trying to prove he isn't racist after a comment about his maid. Franklin doesn't care. Franklin grabs a Blazer and you are told to Follow Dom to the Cargo Plane. Do so and drive up the ramp into the rear cargo area with him. Dom says they are jumping out of the plane on the ATVs. The plane takes off and a little later it reaches a suitably stupid altitude over the Alamo Sea. Back in control, drive the ATV out of the plane. Head towards the landing zone while doing any tricks you wish (flips, barrel rolls, etc). When you start to get low, get off the ATV if you want and deploy your parachute. Otherwise stay on the ATV and swim to shore after crashing into the water.

On the ground or water, meet up with Dom at the landing zone if needed. Once again Dom is quite happy with the jump. With a little frill he tells Franklin he'll be at the top of the Maze Bank Building. Dom walks over to a Seashark and drives away from the area.

A short time after completing the previous mission, Dom will send Franklin a text message telling him he climbed up the Maze Bank Building and Franklin should hitch a ride up. Get a helicopter or plane and get to the top of the building in Downtown LS however you can. The hospital in South LS usually has a helicopter on the lower roof area accessible via stairs or ladders. When you reach the top of the Maze Bank Building you can find Dom down the stairs standing on a pointed edge. He makes a quick speech about not playing it safe.

In control of Franklin, jump off the building and aim for the truck driving on the street below. Take your time and land on the back. Jeff is driving it. Dom will eventually land and the truck drives out to a repair shop in Hawick. When the truck stops Dom jumps off and tells Franklin to meet him at the Land Act Dam. You'll need to complete the 13 parachute jumps located around the map before continuing with this mission string.

The following are parachute locations in GTA V unlocked after Franklin meets Dom. Some are just landing targets but most want you to parachute through numerous checkpoints before landing on the target. Checkpoints and landing as close as possible to the center of the target will reward you with money. Landing outside the target area will fail the jump. You can redo each jump after completing it. Completed jumps have a green checkmark. All three protagonists can complete these jumps. 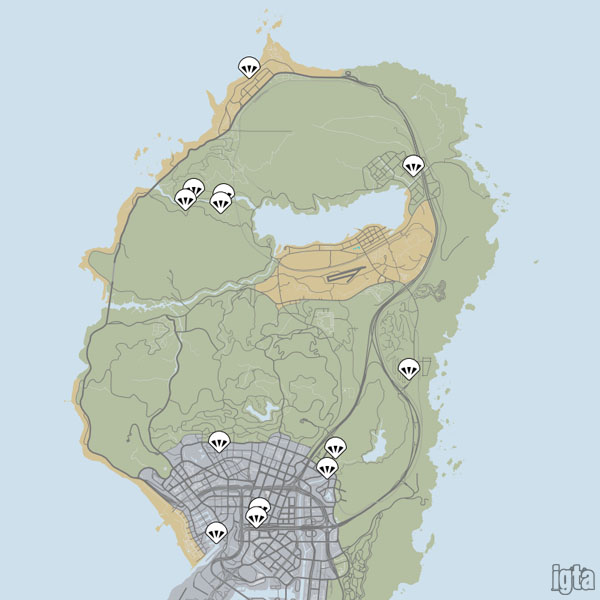 After completing the parachute jumps and the previous mission, go to the marker at the Land Act Dam. Franklin finds the imaginary dog again. It barks at Franklin who interprets that Dom is going to kill himself. The dog runs off for Vinewood and Franklin starts heading towards Dom. Continue to him. Franklin sees Dom hanging off a fence over the dam. He has no parachute and Franklin questions what he's doing. Dom says it's safe but Franklin - and the dog - know better. Dom leaps off the dam and smashes into the shallow water below killing himself. You can now either jump off yourself (with a parachute) or take the Sanchez and drive away. If you want to jump go to the structure and out onto a platform next to it. Leap off and land somewhere on the ground below.