Beverly is a professional celebrity photographer/harasser - also known as a paparazzo. He wants to get a leg up on other photographers and will take whatever help he can get.

Protagonists: Franklin
Rewards: Up to $2000+

Franklin finds a photographer hiding behind a tree next to a building. The photographer - named Beverly - snaps a blinding shot of Franklin who gets a little mad and then more mad when his sexuality comes into question. Beverly has mistaken Franklin for a celebrity named Clay PG who is apparently gay or in the closet as Beverly sees it. Franklin tells the photographer to leave people's personal lives alone. While looking around for real celebrities Beverly explains that Clay PG portrays a tough gangster but is actually soft. He hates celebrities because they think they are gods and above everyone else. A celebrity named Miranda Cowan exits the building and heads for her limousine. The photographer tries to get her attention and tells Franklin to follow him. Franklin wants no part in it but is told there is plenty of money to be made for some shots of her hairy legs - or something else.

Get on Beverly's motorcycle and chase after Miranda's car. Get alongside the limo so Beverly can snap shots of Miranda doing drugs. Stay with it across Vinewood and over to Pacific Bluffs. Eventually another photographer on a motorcycle gets to the limo. Beverly says it's a man named Madison. Forget Miranda, Beverly wants you to get next to the rival paparazzo so he can knock them off. Catch up so he can do so. After the rivals hit the pavement Beverly says he's late for another stakeout next to the Cafe Redemption. Drive him to the next stakeout location. Beverly says Franklin can keep the motorcycle as a reward for his help. Franklin thinks the bike is stolen. 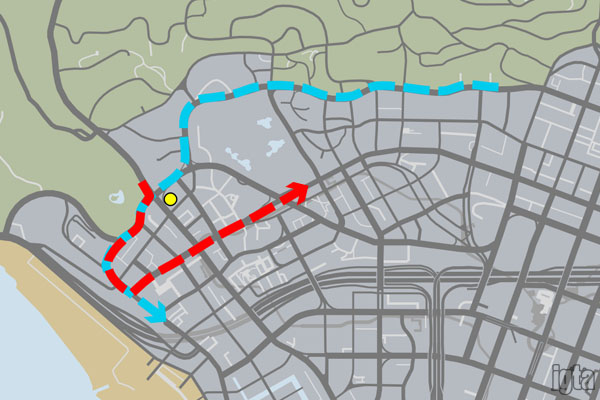 Stop in the marker so Beverly can get off. Franklin sarcastically tells him to keep on making the world a better place. Beverly says people deserve answers and tells Franklin to come by the Manor next week. New-Gen returning players: Shortly after completing this mission Beverly will text Franklin to say he entered him into a photography contest. An email will then come from the LS Tourist Board about a wildlife photography challenge.

Not long after the previous meeting Beverly is found at the Gentry Manor in Vinewood just up the hill from his last location. He tells Franklin what they got the other day is nothing compared to what they'll catch Poppy Mitchell doing to her dirt box. America's newest sweetheart likes more than cotton candy. One image of her getting nasty will be worth a ton of money. Franklin wonders who says America is going to hell - not Beverly - and starts walking. Beverly follows.

Walk with Beverly along the road. He says they need to go in ninja style. Franklin doesn't think they'll blend in very well. Beverly comes to a set of stairs and says he hears someone. Follow him up through a courtyard without making your presence obvious. A maid is walking ahead while talking on the phone. More workers are sitting at the far end of the courtyard and speak with the maid. They all talk about poo in some form. Follow Beverly to the left and run through the pool area with him. Another left and you'll sneak around to the target who is a little preoccupied. In a cinematic Beverly hands over the camera since she knows him. He'll keep a lookout. Franklin moves up and you are put in control of the camera which is recording.

Get a close-up of Poppy and record video. Zoom works like a sniper. Her face has a red bracket around it you need to aim for. It turns green when zoomed in and centered on. From the bland conversation it's obvious she's not quite into it while she plays on her phone. She talks about how she's only a virgin for TV and that she probably won't release a sex tape for at least 3 years from now unless her agent tells her to. The guy behind her - Justin - definitely didn't realize what type of girl she is. Eventually they notice Franklin and the party is over. Escape with Beverly as Poppy gives chase and security approaches behind you. Jump off the ledge and get into his car as a passenger. With Beverly driving Franklin hangs out the back with the camera and you are put back in control. Record Poppy as you both tear through the streets with security SUVs joining the fun. Keep the camera pointed at her to keep the bracket on her face green.

While going through a construction site Poppy crashes into some pipes and the security guards spin out which ends the chase. Beverly drives out the other side and parks a small distance away. Franklin hopes they didn't just make a snuff film but Beverly says she's fine. He can cut out the audio and sell the video as a drug-fueled sex rampage. Franklin gets out of the car while once again talking sarcastically about the job of celebrity photographers. Beverly says someone has to do it. It's a chance to become rich while performing a vital public service. If Franklin doesn't want that he won't meet Beverly again - but Franklin isn't an idiot. Beverly drives off as Franklin calls himself an idiot.

Not long after the previous meeting Beverly is found in a dumpster next to Spitroasters Meathouse near his previous two locations. Beverly asks if Franklin has seen anyone interesting lately but only Trevor Philips comes to mind. Beverly mistakes him for an actual celebrity. He climbs out of the dumpster and tells Franklin there is going to be a reality series about himself. Beverly will attain the same fame as the people he stalks. Since he'll be busy with that he'll need someone else to get pictures of celebrities. Franklin doesn't want to take the job but Beverly convinces him. He'll send Franklin a list of names. Beverly hops back into the dumpster saying fame won't change him. Franklin has no opinion.

Not long after you leave Beverly he'll text Franklin about location rumors from the celebrity grapevine. Franklin is told to call Beverly when he goes in for the shots. Celebrity locations will now be marked on your map with green search areas. The next two missions will now become available involving each location. You'll be given instructions of who - or what - to photograph. 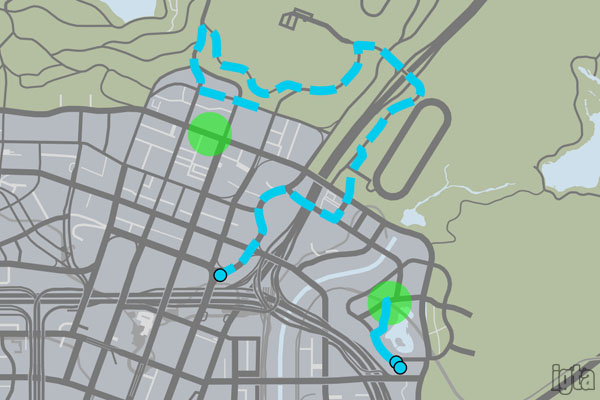 The first area is around the Oriental Theater in Vinewood. When you enter the search area Franklin calls Beverly who says Poppy Mitchell is currently in a drunken high-speed chase with police. Beverly wants pictures of her getting busted. Catch up to the chase which is a block north. Follow Poppy in her pink Cognoscenti Cabrio and the lone cop chasing her. As she makes her way into Vinewood Hills a helicopter joins the chase. While coming back down the hill the cop car flips and crashes but another picks up the chase. Continue following them past the racetrack and through the casino parking lot. She goes over to City Hall but ends up crashing into a tree. The chase is over and the cops move in. A quick cutscene shows Poppy climbing out onto the ground saying "This isn't happening". She crawls towards the cops and they move in for the arrest.

Use the camera in your phone to snap a picture of Poppy. When you get the picture send it to Beverly. He'll reply back telling you to get out of there before you get busted too. Leave the area to complete the mission. Afterwards Beverly calls Franklin. He loves the photo and how their video of her getting dirty made her crazy. As for the job, Franklin says it isn't Iraq but it would be better if he was getting paid. Beverly says he will in due time. The truth comes first.

The second area is over in the neighborhood of Mirror Park. Beverly calls Franklin to tell him about English Princess Georgina who likes to smoke weed. There's a deal going down right now. Franklin needs to meet with Beverly's contact outside a local hypermarket. Drive around the lake to meet the contact. He says the deal is going on out back with heavy security. He would take a photo from the roof if he was Franklin. He says this conversation never happened and walks off.

Choose how you want to sneak around to the deal and snap a shot of the princess. When you get the picture send it to Beverly. He'll reply back telling you to get out of there before you get caught. If you do get caught expect a hail of bullets from angry people on both sides coming after you. Leave the area and Franklin calls Beverly. He loves the photo and can't wait for all of the highness puns. He's going to be rich - and Franklin too of course. He'll see Franklin later.

Not long after capturing the two celebrities Beverly can be found back in Vinewood at the Generic Hotel down the street from his past locations. He's in the middle of filming his new reality series and doesn't like it when Franklin ruins a shot of him pretending to jump out from behind a tree. Franklin reminds him who got him shots of Poppy Mitchell, the princess, and the others. Beverly says he forgot and time has been flying by. Franklin wants his money but Beverly pretty much kicks him off the film set. Franklin can have somebody call his agent. Disappointed in the now "famous" Beverly, Franklin walks away.

Beverly tells the camera crew to set up the shot again and his blip flashes red/blue. You can either keep walking away or kill him. He'll talk to the crew about how much easier it is to have his agent call a celebrity's agent and stage seemingly random paparazzi encounters. They get back to filming his intro for another Poppy story. After getting the shot they call it a day. Beverly gets into his car and drives off. If you kill him you can collect $2000 from his pockets plus more from the crew.