Abigail is a widow who was married to a famous submarine operator named Frank Mathers. His sub broke apart while on a mission and Abigail needs evidence it was an accident for the insurance company.

After purchasing the Sonar Collections Dock in Paleto Cove for $250,000 you'll get an email from Dr. Varley which opens up the nuclear waste collectibles. To make the stranger mission spawn after the purchase go back up the cliff until the "?" marker appears near the end of the dock (out of radar range).

A woman greets Michael and asks if he was a fan of Frank Mathers. Michael says Mathers was into space until he became obsessed with undersea exploration and Michael is not a huge fan. Regardless, the woman - Abigail - says she was married to Mathers. Michael tries to recant his statement by saying he is actually a fanatic. Abigail informs Michael that Mathers was a cruel person - and once again Michael is not a huge fan. Michael questions if she was the person Mathers had left his sick wife and five children for. She says they loved each other but now she is penniless. Frank's submarine broke apart while trying to save the San Andreas white shark. His body was never recovered. Michael heard the airlock was tampered with but Abigail quickly confirms that it was a lie never proven true. She loved Frank and the two invested heavily in life insurance. If they can prove Frank is dead and that the airlocks were not tampered with she can sleep much easier. She'll make it worth Michael's time and he agrees to take a look. A special Dinghy is now docked at the end of the pier. It will assist you in finding the missing submarine pieces.

You now need to locate the 30 submarine pieces scattered around the waterways of Blaine County and Los Santos. When you get into the Dinghy look at your map for a search area. The first one is northeast off the coast of Paleto Bay. Get to the search area and sonar will pick up a more specific location. Exit the Dinghy and you'll be given SCUBA gear with the sonar continuing to radiate out from the piece. The Dinghy will remain marked on your radar. Dive down and collect the glowing piece as well as other pickups in the area such as weapons. If another piece is nearby that will now be picked up by the sonar. If you are not close enough return to the Dinghy and another search area will appear on the map. 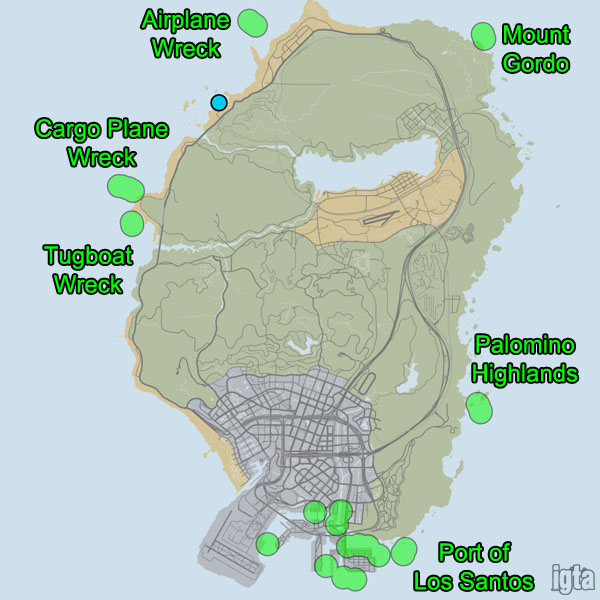 Tugboat Wreck near Fort Zancudo
9. Stern of the boat under the stairs.
10. On a dislodged bow section south of the previous.

Locations near Mount Gordo
29. On the seabed in front of a Cropduster wreck.
30. In the crevice of some rocks on the seabed northwest of the previous.

Once all of the submarine pieces are collected Abigail will call Michael. Michael says he got all of them but something is wrong. He'll explain in person back at the pier in Paleto Cove.

Michael brings a piece of the submarine airlock to Abigail. He thinks the airlocks were in fact tampered with. Abigail - a nautical engineer - says it's just normal wear and tear. Michael cleans off the piece and finds a message scratched in by Frank declaring that someone did mess with the airlock. Abigail laughs it off saying it must have been his ex-wife. Michael presses her that something isn't right and Abigail says the police must be in on it and will take the findings to the FIB. She starts to quickly walk off but Michael wants his promised compensation. She gives him a $10 bill which doesn't quite work for Michael. She then gives him a signed photo of Frank and walks off. Michael tosses the picture and you are put back in control.

Abigail shows on your radar as a flashing red/blue blip. You can kill her or let her live. She walks up to her car and takes off. If you follow her she will drive all the way to Los Santos International Airport. When she gets out of the car she'll scream for help and you'll be given a 3 star wanted level.