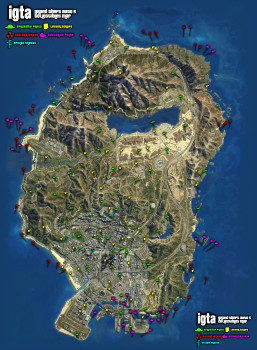 There are a total of 30 Nuclear Waste Barrels to collect in GTA V to unlock the 'Waste Management' Achievement/Trophy.

It doesn't matter which character you use to collect them, and you can purchase the Sonar Collections Dock with either character as well. It will be available to purchase once you unlock Trevor in the main story. The property is in the Northwest part of the map and costs $250,000. A Dinghy and the Yellow Submarine will spawn there once the property is owned.

The Benefit of collecting the Nuclear Waste Barrels is you get $23,000 per barrel. This applies to any character you use to collect these with. These alone will pay off your business after collecting just a dozen of them. The Trackify app will always direct you to the nearest barrel as well so this shouldn't be too difficult, just time consuming.

CLICK on the IMAGE to the right to see the entire map of collectibles. This guide follows that map.

Northeast of the Sonar Collections Dock, among the seaweed.

North of #2, toward the horn of Paleto Bay, near a small hill on the sea bed.

Northeast of #2, on West side of Paleto Bay, near a narrow tunnel entrance.

To the East of Paleto Bay, above the loop in the road and slightly West. It's deeply buried in a dark chasm, nestled in low rocks.

Directly North of the loop in the road, directly under an archway.

West of #5, closer to the Truck Stop, on a flat section among the rocks, in a small valley/crevasse.

North of Mount Gordo, in a deep ravine, on a shallow shelf right above Crush Depth.

South of #8, closer to Mount Gordo. On the sea bed, beside a jagged formation to the East of an underwater archway.

Very close to #9, directly beneath the archway mentioned in #9.

Northeast of San Chianski Mountain Range, outside the bay beside Humane Labs and Research. Nestled in ground weed, right beside a pointy rock formation to the East. Has a boulder at the bottom.

Center of the bay beside Humane Labs and Research. One a sea bed, in an open area.

Deepest spot inside the bay beside Humane Labs and Research hiding in some seaweed.

At the mouth of the bay beside Palomino Highlands, nestled in ground seaweeds.

Southeast of the bay beside the Palomino Highlands, in a very deep crevasse, at the very bottom.

East of El Burro Heights, directly East from the Car Scrapyard. Stuck in the side of the cliffs, deep beneath a kelp bed floating above.

Southeast of the Scrapyard, in line with North edge of Red Shipping Tanker. At the base of a rock formation, it's the taller of two that are near each other, right below a floating bed of kelp.

Southeast of Scrapyard, in line with South edge of Red Shipping Container. On top of a low pile of rocks off the right wings of the plane.

Pleasure Pier, at the end of the pier, where the pillars stop.

Just North of Pleasure Pier, along an underwater bed among the coral.

Just West of #20 near Pleasure Pier, perched at the edge of a plank shaped ledge.

North of #21 towards Pacific Bluffs. Directly beneath a bank of kelp, on sea bed among some medium sized rocks.

Continue Northwest along the Bluffs, it's resting on top of a mound.

South of the pier near Banham Canyon. Very shallow area, on reef shelf on a gentle incline down, very visible.

South of the Zancudo River mouth, on the sea floor.

North of the river mouth, near Lago Zancudo. On the sea floor, visibility makes it hard to see.

West of 26 rounding the bend around Lago Zancudo, near a row of rocks, among the seaweed.

South of the Plane Wreck, on a ledge. Lots of seaweed in the area.

West of North Chumash, in a deep valley, on a ledge in a rocky area.

West of North Chumash, close to #29. Continue along the same valley and dive deep... This one cuts it close to the Crush Depth.

After collecting all the Nuclear Waste Barrels, you'll not only unlock the Trophy/Achievement, but make a cool $250,000 upon completion. This side objective is worth it in the end as you will have amassed nearly $1,000,000.
All content created by and property of iGTA5.com and must not be reproduced without express written permission. © 2011-2021 iGTA5.com