Michael enters the office of Solomon Richards and is immediately quizzed on some movie quotes. Michael nails them and impresses his idol who is without an assistant these days. Richards asks if Michael is Weston's hitman but Michael says he is here to help since Richards is supposedly retiring. Richards says he is not but his son and Weston want to turn the studio lot into condos or a theme park or whatever. Michael knows all too well the value of a movie studio and asks what Richards is making. Richards says it's set in Liberty City and about a financial meltdown. The problem is talentless actor Milton Mcelroy and his greedy agent Rocco Pelosi holding up shooting. Director Anton Baudelaire is also having a mental breakdown somewhere. Michael agrees to be the new assistant and heads out.

Drive to East Los Santos. Richards will call Michael to give him a little more information. He doesn't want anyone dead but wants them in a better mood. Anton and Milton should be at a club - currently a rat pit - in East LS. Pelosi is on the way to bring them to a lawyer and sign contracts. If they know someone from the studio is on the way they'll get out of there fast. Michael will go in quiet. When you reach the marker a cutscene shows a helicopter land on the roof of the club. Pelosi and his pilot exit the chopper. Pelosi greets Milton, Anton, and another man named Gianni saying this building will be an awesome club when it's done. Anton and Milton get into the chopper. Pelosi needs to grab something inside so he and his pilot enter the building. 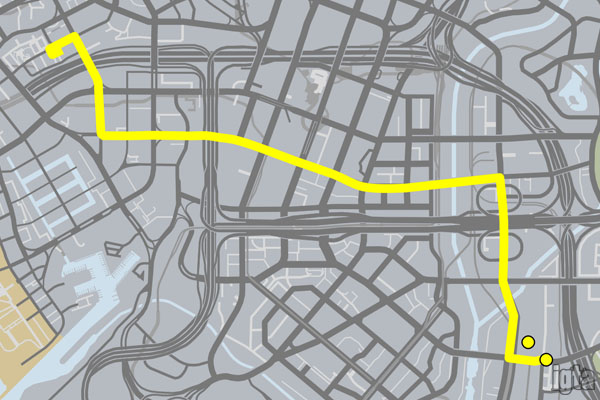 Back in control of Michael, get to the helipad without alerting Rocco. Climb the fence and head for a ladder on the left of the alley. Two workers will be having a chat nearby so enter stealth to reduce your noise getting to the ladder. Climb up and walk straight. Another worker is next to an air conditioner. Sneak up and stealth kill him. Continue ahead and there are two ladders:

Upon reaching the helipad Michael will announce his presence but Gianni says the club is closed. Rocco comes outside and Michael tells him the actor and director love their contracts and are going back to the studio with him. Rocco laughs and decides to take on Michael by himself. Beat up Rocco. He'll take quite a few hits to go down but when he does he agrees to leave Michael's people alone in exchange for not getting thrown off the roof.

Get in the helicopter. Milton says he and Anton won't be bullied but Michael will test that theory. You are told to fly erratically to change their minds. Fly fast, under bridges, or close to buildings in order to scare them. When successful they will give up. Fly back to the studio and land in the lot. Walk over towards Solomon's office with the other two following you. 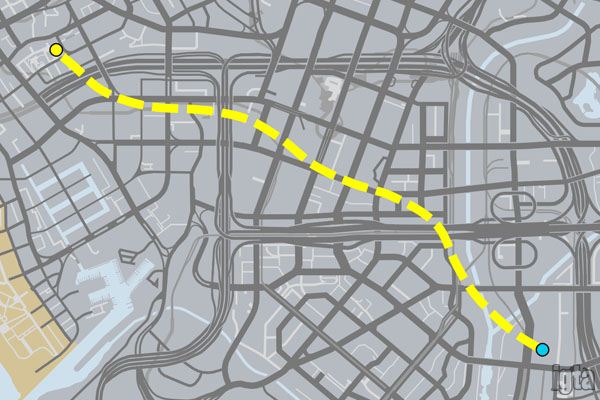 Richards runs out to meet them. He tells Anton he can work his magic on the film and sends him away. Over to Milton, Michael makes him apologize before walking away. Richards is very happy with his new assistant and promotes Michael to Associate Producer. Needless to say Michael is ecstatic. Richards goes back to his office.