Franklin walks up to Michael's house but nobody is home. He calls Michael who is still hiding at Trevor's place in Blaine County. Michael briefly explains the situation and they hang up. Trevor wakes up and yells for Ron to make him coffee. When Ron comes over he is introduced to Michael and Patricia. Trevor tells Patricia he doesn't want to hurt her but may need to cut her up into pieces. She says Trevor is a good man but Michael disagrees with her. Moving over to Ron, business hasn't been very productive during Trevor's vacation but Ron has heard of a large weapons shipment going to Merryweather that they can intercept. Trevor is delighted and Michael is ready to go but Trevor tells him to stay with Patricia. Trevor and Ron head out.

In control of Trevor, get in his truck. Ron says the shipment of weapons is coming in by air. Get to the airstrip north of the lake where a plane is kept. Trevor tells Ron they are not going to take out Merryweather on the ground so they will meet the plane in the air. Ron knows Trevor was upset about the Merryweather heist so he worked on this project for him. Ron admits he isn't that impressed with Michael and Trevor agrees but he wants T.P.I. to be much bigger - corporate size - and the life of an executive. Ron heard there's plenty of money in Oscar Guzman's weapon trade and they should buy into it. Trevor disagrees and wants Ron to call up their Mexican contact about their future stock of guns.

When you arrive at the airstrip get in the Cropduster and head out to meet the cargo plane. Ron keeps in touch using a CB radio. He says the plane is in a holding pattern and not to fly too high or else the radar at Fort Zancudo will pick him up. If you are too high a beeping sound will be heard and Ron will warn you. Get to the plane and follow it. Do not fly directly over the military base. You'll end up flying along the coast past Paleto before getting out of the radar's range. 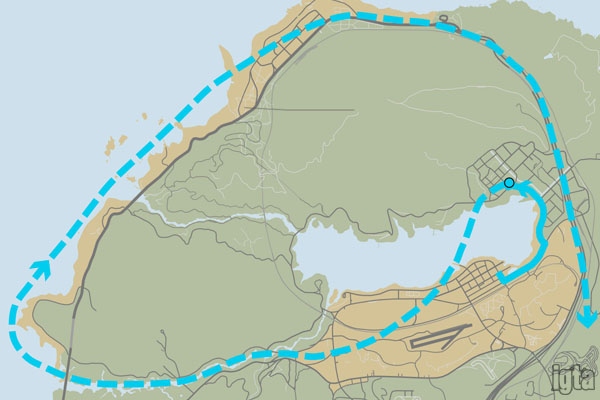 Once you are in the clear fly up to the cargo plane. The plane's crew will contact Trevor on the radio and tell him to divert but he disregards their warnings. When you get close the rear loading ramp opens and soldiers begin firing RPGs and bullets at you. Stick with it and fly the Cropduster right up to them. When you are close enough a cutscene shows Trevor crash his plane right into the cargo area. He hops out and the Cropduster falls along with some of the cargo.

Trevor takes cover behind a crate and you are put back in control. Take out the guards scattered throughout the cargo area. Make your way towards the front of the plane while dodging bullets and vehicles rolling out. There are eight guards. When they are all dead climb the ladder up to the cockpit. The pilot will be ready with a gun pointed at you so kill him quickly. Take over the cargo plane's controls just like a normal vehicle.

With Trevor commanding the aircraft, fly back towards McKenzie Field. Fighter jets come after the plane and Ron says to gain altitude. The pilots contact Trevor and tell him to fly to the base. Once again Trevor disregards the orders. Eventually the jets state they are authorized to use force and fire missiles at the cargo plane. The tough bird takes the beating except for one of the engines. Ron yells at Trevor to bail and he decides to find a parachute.

Inside the plane, jump out on your own or take the remaining Mesa and hit the gas. Remember the plane is going down to it's an uphill battle to get out. When you are out you'll be over the lake and with Sandy Shores in view. Deploy your parachute as the cargo plane crashes into the west end of the lake. Land safely to complete the mission. Shortly after Ron will call and say they can still salvage the guns from the lake. He'll then question if Trevor is involved with the FIB since Agent Sanchez came by looking for Trevor and Michael. Trevor responds that he is doing something with the FIB but they aren't using him - he is using them. If you SWITCH to Michael, Trevor will send him a message confessing his love for Patricia. Tracey will also email her father. How retro. Eventually Martin Madrazo also calls Michael wondering what they have done with his wife but Michael says he'll make things right somehow.

At this point both Michael and Trevor need to stay away from Los Santos or else Martin's men will track them down. They appear in SUVs chasing you around with gun fire until you are dead or flee back to Blaine County.