Did Somebody Say Yoga?

Michael is busy watching TV again but this time Amanda interrupts to extinguish his cigar and tell him how Trevor's arrival isn't helping his attitude recently. She doesn't want Trevor near the kids and after calling Michael by his non-Christian name Fabien enters the room. Amanda snaps back into peaceful mode for a few seconds before getting back into it with Michael. Fabien decides - to Amanda's dismay - that Michael should join their session.

Outside the three get into position on their yoga mats. Fabien begins introducing moves and you are told to complete them. Hold the analog sticks in the position shown then use the triggers to breathe. Do so for all three positions. After the third, Michael is actually starting to feel good until Fabien takes a questionable position behind Amanda. Michael attempts to knock Fabien into the pool but falls in himself. Amanda grabs Fabien and says they are leaving for good. Michael continues to cuss while he gets out of the pool.

Go upstairs to Jimmy's room as Michael calls out his name. He'll be busy playing his games. Michael admires his new TV and tells him they are going for a ride. Jimmy needs to meet a friend but Michael doesn't mind an extra stop. Jimmy eventually gives in. Walk out to the car and get in. 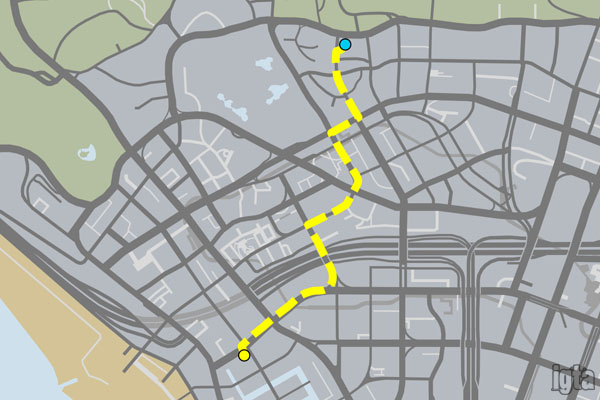 Drive to Burger Shot. Michael attempts to relate to Jimmy but it doesn't work that well. Jimmy presses Michael and then tries to label his father as a monster. Michael can't really explain his feelings that well. Pull up to Jimmy's friend on the side of Burger Shot. Jimmy gets out and greets the friendly neighborhood drug dealer before introducing his father. Michael doesn't seem to mind Jimmy's recreational activity and tells them to hurry up. Jimmy speaks quietly to the dealer who then runs inside and then back out with a drink. Jimmy takes it and gets back in the car.

Return to Michael's house. Along the way Jimmy convinces Michael to take a sip of his drink. After a couple seconds the screen starts to get blurry and Jimmy says he'll take a sip later. Michael's driving becomes erratic as if he is drunk and the screen continues to worsen as sound becomes distorted. Michael knows something is wrong but Jimmy says he's fine. Michael decides to stop. As screwed up as his mind is right now he still knows Jimmy drugged him. Jimmy pushes him out while saying that he's moving out and took some money. Michael is left on the ground but not for long...

After an unknown person drags Michael away the screen goes dark and flashes colors. Michael then awakens in a back alley surrounded by monkeys. His head is still spinning and he passes out again. A beam of light appears above him and his body rises into a UFO above. Inside the ship aliens examine Michael's body before releasing him from the ship into a freefall. Michael screams with a colorful city below him before leveling out. Music starts and various quotes from the game such as Michael's therapist are heard. Move the camera around and alter Michael's path however you wish. Video filters create quite the show. When you finally hit the ground or a building the screen will go dark again.

Michael wakes up in some grass a few blocks from his home. His head is still spinning a little but he still knows Jimmy did it to him. Grab the bicycle nearby or steal a vehicle and go back to Michael's house. Michael's vision will return to normal shortly. Walk inside the house and go to the kitchen. Michael finds a note on the counter from his wife. Long story short she and the kids have moved out for a while. Michael crumples the note. Later Michael is found sitting on his door step with a new set of clothes.

Yoga is now available. Jimmy will send you a message that he also borrowed your car (in addition to $3000).