Michael attempts to watch TV but Jimmy's loud videogame trash-talking upstairs gets on his nerves. Michael goes up to confront Jimmy about his yelling but is met with dismissal. Anger builds and Michael smashes the TV which completely surprises Jimmy. They end up discussing Michael's issues and how Jimmy needs to go outside and do something with his life. It is decided to take a bicycle ride along the beach.

Jump into Michael's car with Jimmy and head to bike rental stand in Vespucci Beach. Along the ride Michael and Jimmy continue to argue and discuss their issues. Park the car and go to the rental stand. Michael orders two bikes and is told to pick whichever he wants. Grab one and Jimmy will want to race to the end of the pier. 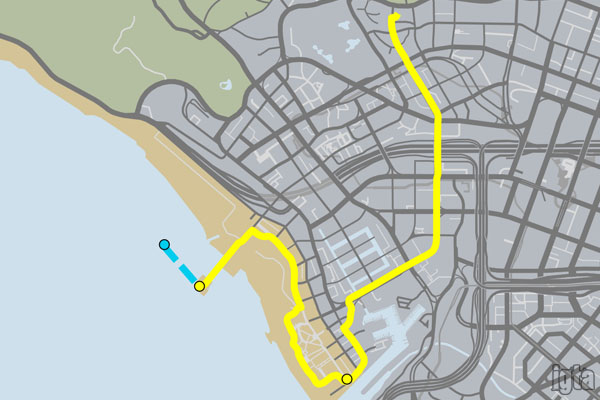 Bicycle controls are displayed. There are no checkpoints so follow the designated route or just use the walkway along the buildings. There are plenty of people near the buildings so staying on the beach paths may be a smarter move but you'll need to dodge those people near the end to get onto the pier anyway. Get to the marker at the pier's end to finish the bicycle race.

Michael thinks the two are having a good time but Jimmy is still concerned about their relationship. Michael says he's hard on Jimmy because of all the trouble he gets into when his sister does nothing of concern. Jimmy explains - in some straight talk - that aspiring star Tracey isn't exactly an angel either. He says she's actually hanging out with producers and porn stars on a yacht not very far from the pier. Michael becomes angered again since it's probably why Jimmy wanted to come to the pier. He takes off his shirt and gets ready to swim out there.

In control of Michael, jump into the water and swim to the yacht. Swimming controls are displayed. When you get to the yacht there are ladders on either side of the stern to climb up. Go up the stairs and find Tracey.

Tracey is found dancing on a table in front of two dudes and two other women. Michael tosses the music player and tells his daughter to leave her porn-producing friends. Tracey is reluctant to leave and informs her father that their own house was used for a porn shoot last summer. Michael grabs his daughter and shoves one of the guys off the boat when he gets in the way. They head back down to the water. The owner of the yacht hears the commotion and becomes angry that someone caused trouble on his boat. Michael and Tracey get on a Seashark with the other guy and owner grabbing their own to give chase. 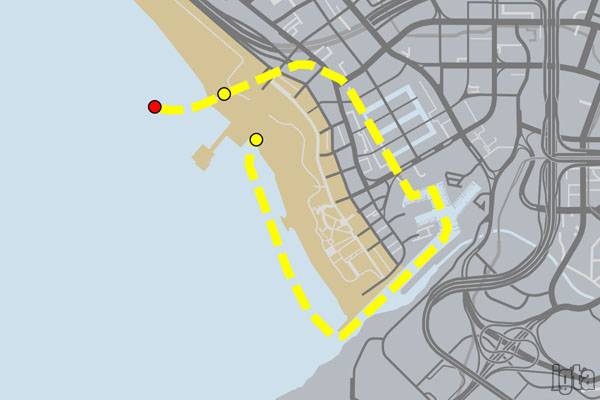 Back in control, escape the pursuers by riding into the water outlet on the beach. They'll start shooting but it is difficult to keep a steady hand on the water. Continue through the tunnel and out into the marina before heading back towards the ocean. When you get near the bike rental shop the pursuers will give up. Tracey thinks she is going to die but Michael says it will be alright. Take Tracey to the shore.

After landing Tracey goes after Jimmy for ruining her day. Jimmy says it wasn't him it was their crazy father - Jimmy simply told him where she was. Tracey and Jimmy head off to get a cab. Michael offers to drive them but to no avail. We find Michael later smoking a cigar at the end of the pier. Triathlon events are now available near the airport.